Arteriovenous Malformation of the Prevertebral Region: A Case Report

Arteriovenous malformations (AVMs) are a congenital lesion which can present in any period of life. They are slow-growing lesions. The most common site is the brain. Extracranial lesions are quite rare. They can be treated by surgical excision or by endovascular therapy. Here, we report a case of AVMs of the prevertebral space.

Vascular or AVMs are a result of an error in embryogenesis, always present at birth, can manifest at any age, and can grow with growth of the child. They can be further divided into slow flow lesions (veins, capillary, and lymphatic) and fast flow lesions (arterial, arteriovenous fistulas, or shunts). Around 51% of the lesions are present in the head and neck regions with a majority of them occurring within the cranium. Treatment options include surgical excision or endovascular techniques. The endovascular approach includes embolization, coiling, and injecting sclerosants.4

AVMs of the prevertebral region are a rare presentation. It is a slow-growing lesion but a risk of involvement of the brachial plexus, nerve roots, and vertebral arteries is present. The accessory nerve lies superficial to prevertebral fascia.

A male child, 12-year-old, presented with a huge swelling in the left side of the neck (Fig. 1). Parents had noticed the swelling around 7 years back, it gradually increased in size. There is no history of pain, restriction of neck movements, paresthesia, or weakness of the left upper limb. Swelling was of variable consistency, posterior extending up to cervical vertebra. Transilluminance was absent, and it was not compressible. No bruits over the swelling. The skin over the swelling was normal with no rise in the temperature. Ultrasonography of the neck showed a cystic lesion with multiple septations. On needle aspiration, bloody aspirate was noted. Magnetic resonance imaging (MRI) of the neck was suggestive of a vascular malformation (Fig. 2).

Surgical excision was planned. During surgery, a left transverse neck incision was taken and flaps were raised both superiorly and inferiorly (Fig. 1). The sternocleidomastoid muscle was retracted anteriorly. The lesion was separated from carotid and internal jugular vessels anteriorly; brachial plexus, subclavian vessels, omohyoid, and scalene muscles inferiorly; and base of the skull superiorly. Posteriorly, the lesion was found to extend up to prevertebral space of the cervical vertebra, which was released. During the dissection, the above-mentioned structures along with the left phrenic nerve and the left vagus nerve were identified. Adequate hemostasis was achieved and neck incision was closed after keeping a drain.

The postoperative period in the hospital was uneventful. Follow up during the period of 2 months is also uneventful. Histopathological examination of the specimen showed it to be an AVM (Fig. 3).

AVMs occur due to failure of complete involution of the fetal capillary bed in the primitive retiform plexus resulting in the development of the abnormal connection between arteries and veins. This leads to progressive engorgement and destruction of the tissue and may lead to venous hypertension and cardiac failure due to the high output state.5,6 They can be present in any part of the body; however, intracranial is the most common site. Extracranial AVMs are quite rare.7 It is proposed that a defect in ephrins or its receptors is involved in the formation of the AVMs.8,9 The cause of expansion of the AVM is thought to be dilatation due to increased pressure and flow and ischemia due to trauma. AVM progresses through four stages classified by the Schobinger clinical staging.10,11 Stage I lesions are in the quiescent phase, asymptomatic, usually from birth to adolescence. Stage II lesions are in the progressive phase, usually occur in adults. The expansion at the lesion occurs at puberty, pregnancy, and trauma. In addition, some forms of treatment like incomplete arterial ligation and partial excision can also stimulate a quiescent lesion to progress. Stage III lesions mimic stage II lesions, but associated with tissue destruction. They present with ulceration, hemorrhage, and pain. Lytic bone lesions may also be present. Stage IV lesions present with cardiac decompensation. 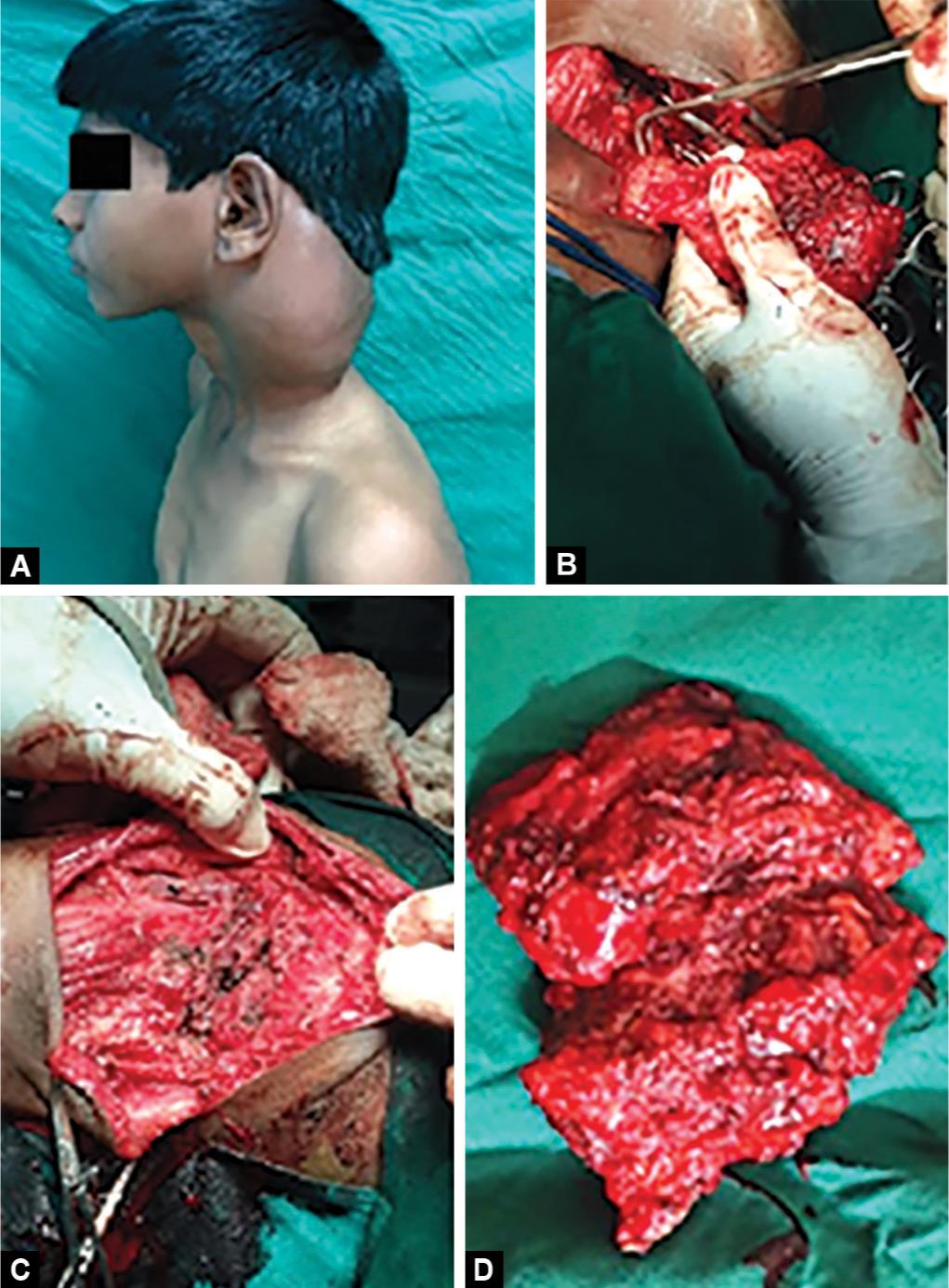 Figs 1A to D: Clinical picture. (A) Swelling in the left side of neck; (B) Intraoperative picture showing lesion of the lesion; (C) After the removal of the lesion; (D) The lesion after excision 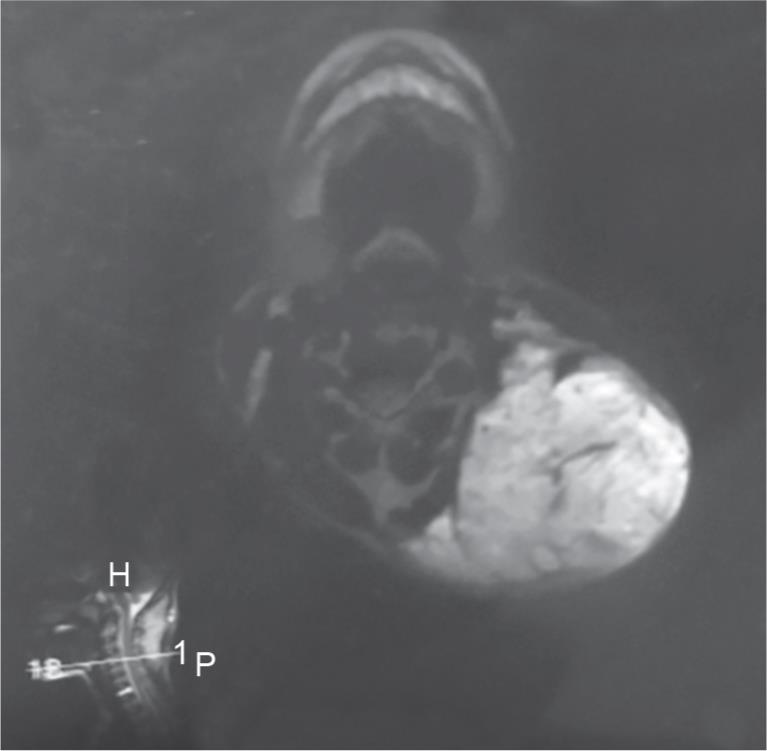 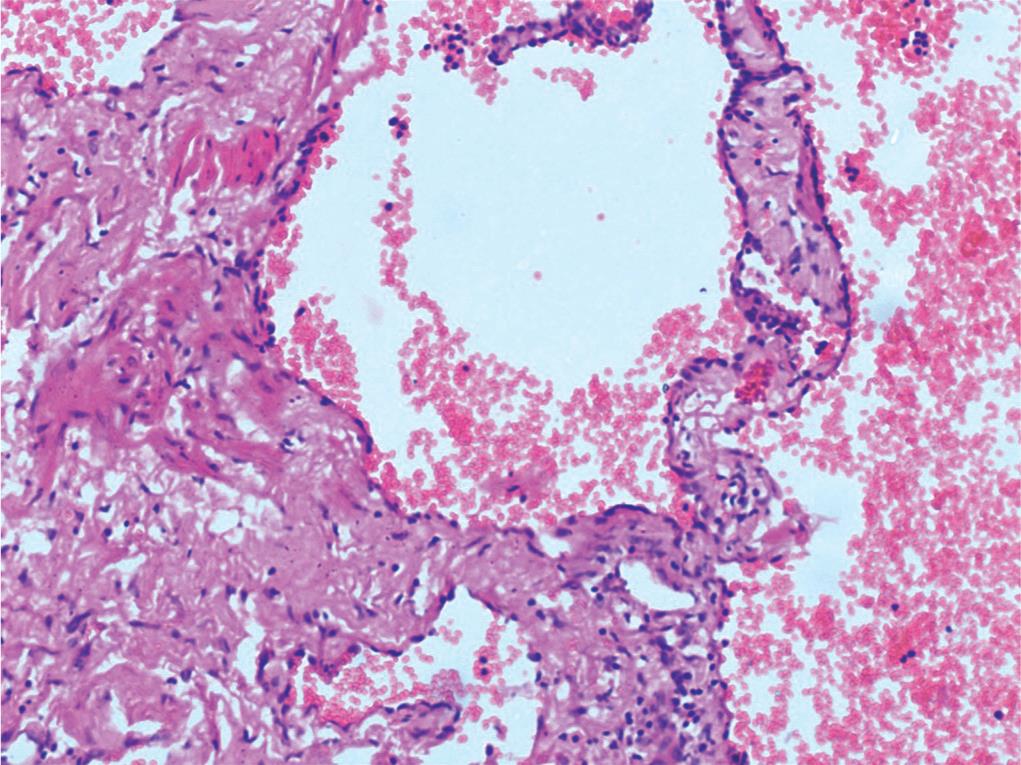 AVMs are diagnosed clinically and radiologically. Color Doppler examination can show the flow characteristics. Magnetic resonance angiography is a noninvasive method of analyzing the flow and extent of the lesion. Angiography can be done to know the feeding vessel when embolization is planned.

Many treatment options are available for AVM. Observation may be used as a temporary measure for asymptomatic lesions or in specific conditions like pregnancy and extreme age. Arterial ligation was used in the past purely as a symptomatic measure or before surgery.12–14

At present, selective angiographic embolization is the first line of management. Occlusion can be done by coils, balloon, or liquid glue.12,15 Radical surgical resection as in cancer is also proposed. Improper surgical resection may lead to recurrence of the lesion. In the above-described case, surgical excision was a feasible option.

AVMs are rare lesions of the prevertebral region. They can lead to chronic pain, ulceration, hemorrhage, and tissue destruction. They may progress to venous hypertension and cardiac decompensation. Some kind of intervention is, thus, required.