Neck Nodes at Level IIB in Oral Cavity Carcinoma: Can We Leave Behind Visible Nodes?

Introduction: Oral cancer patients have a chance of metastasis to the cervical nodes. A prophylactic neck dissection is advised in clinically undetectable necks. The extent of the neck dissection has been in doubt and various levels with a low propensity are usually skipped such as level IIB. Though a routine level IIB node dissection is not suggested in patients with N0 neck, it is often confusing when visible nodes are present in this subgroup.

Patients and methods: A prospective analysis of consecutive oral cancer patients was conducted to see for level IIB nodes in an ipsilateral neck dissection.

Results: Forty-four patients underwent a neck dissection, including level IIB, retrieving 165 nodes from level IIB. Stage-wise distribution was 9, 22, 3, and 10 patients in T1, T2, T3, and T4 stages with majority in tongue cancers. An estimated 30 patients had a clinically node-positive disease, but only 18 underwent a modified or radical neck dissection. A pathologically node positive disease was seen in 12 patients, but only two had level IIB positive (0.01%), both of which had positive level IIA nodes.

Conclusion: This study adds to the evidence that the majority of nodes in level IIB are reactive nodes and a metastasis to this group in isolation is unlikely.

Sublevel IIB nodes are located posterolateral to the vertical plane defined by spinal accessory nerve.3 A clearance of level IIB requires dissection around the SAN. SAN is at a risk of damage when dissection is done around the nerve owing to a damage to the vascularity and due to traction.4 The recognition of level IIB as a distinct site is recent and the concept has not been clinically validated.5 The incidence of metastasis to level IIB and the oncologic safety in preserving tissues in this subsite is studied by various authors. In the present study, we assessed whether the visible nodes at level IIB are of significance by finding the incidence of metastasis to this subsite.

After institutional review board clearance, a prospective analysis of all patients who were treated by surgery for the oral cavity carcinoma at our centre was done. All patients had a histopathologically confirmed squamous cell carcinoma. The primary tumor was staged according to AJCC 7th edition (2010).

The level IIB specimen was labeled, processed separately, and analyzed histopathologically. The nodes were sectioned according to the standard method by dividing it into two planes. The incidence of a level IIB lymph node metastasis and neck recurrence was evaluated. Shoulder dysfunction was assessed using a constant scale by a physiotherapist on the first and seventh postoperative days.

A univariate analysis was done using a logistic regression test to see for any association. Univariate associations between IIA and IIB positive patients were calculated using the Fisher exact test. 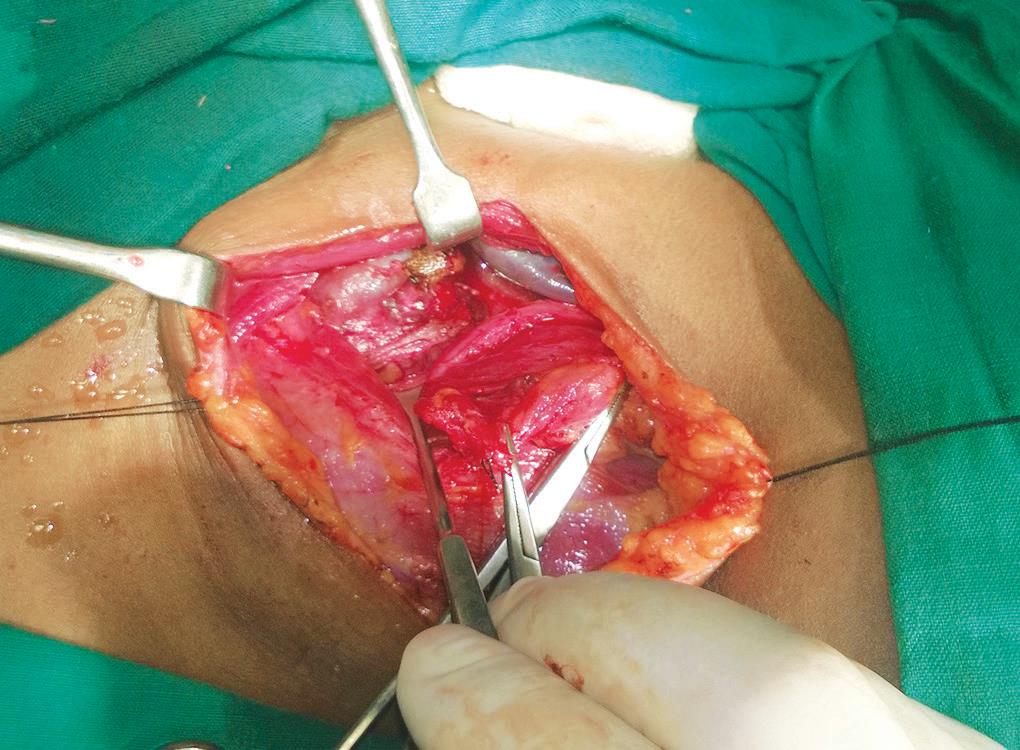 Statistical association was found for the pT-stage (Chi-square test, p = 0.027), and association close to significance was found for the primary site (chi square test, p = 0.06). There was an association between nodal metastasis to level IIA and IIB (p = 0.011). There was no occult metastasis to level IIB alone. Statistical significance was also noted between the extracapsular spread and level IIB nodal metastasis. The number of patients with a nodal positivity was 12, of which only 2 were positive at level IIB (16%), but there was a greater nodal positivity in the tongue carcinoma (34%).

Smith et al.13 in a prospective study analyzed the incidence of lymph node metastases to level IIB in selective neck dissections. Only 8.75%7 had positive nodes to level IIB. Only patients with N2b or greater stage were positive for level IIB nodes. They advocated a level IIB dissection in patients with a greater than N2b status. Santoro et al.5 questioned the necessity of dissecting this level in N0 necks. The authors prospectively analyzed 114 patients and found that the incidence of positive level IIB was 2% and 5% in N0 and N1 patients, respectively. All the patients with metastases at level IIB also showed metastases at level IIA. Metastasis between the presence of level IIA and level IIB were statistically associated. In our study, the pathological node positivity was found in 12 (out of 44) patients, of which only two were positive in level IIB. 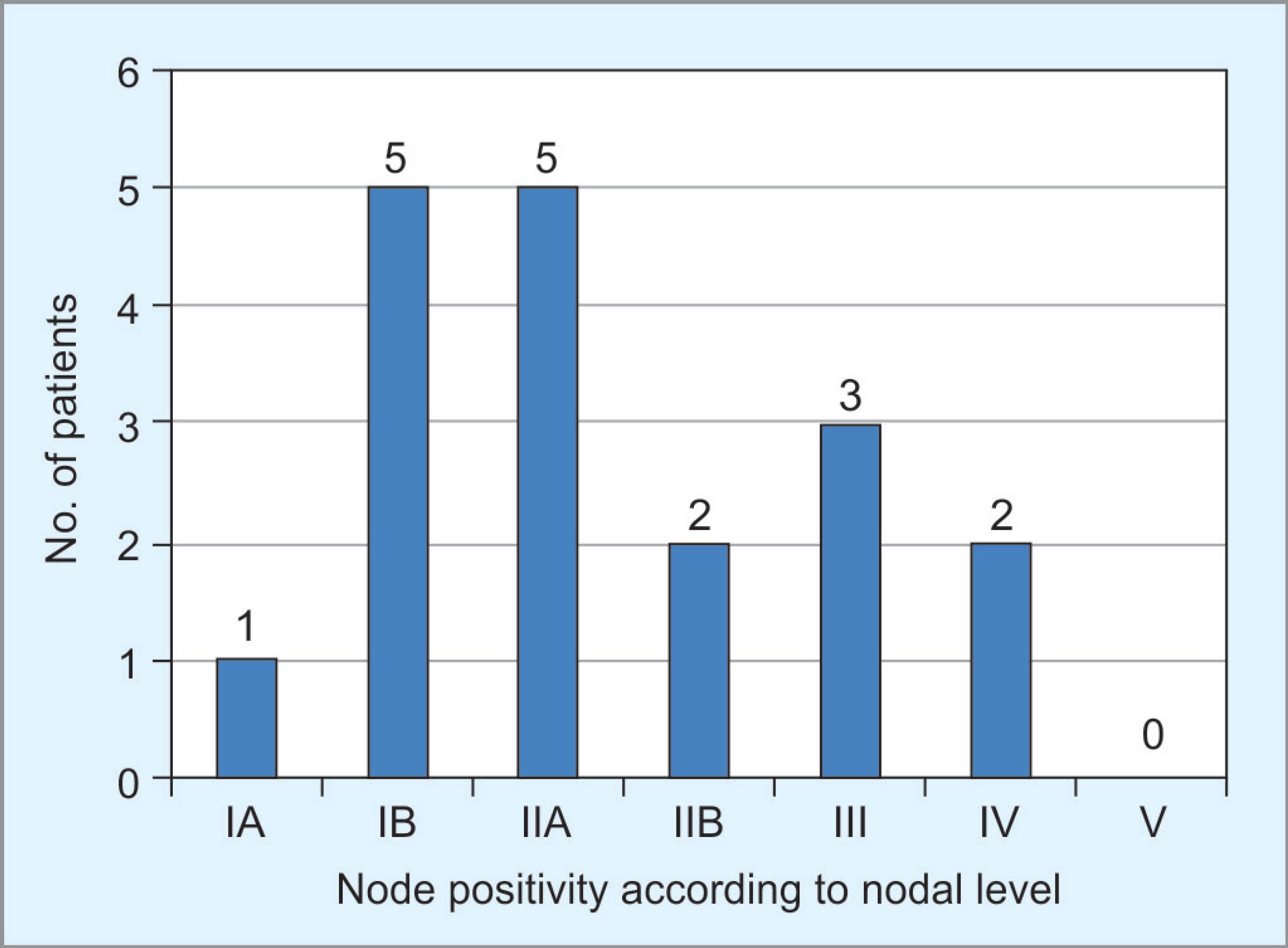 The incidence of occult metastasis in level IIB for oral cavity, oropharyngeal, and laryngeal cancer was found to be 3.9%, 5.2%, and 0.4% patients, respectively by Paleri et al.11 They found nodes between 0 and 7 nodes were harvested from level IIB. The number of nodes dissected from level IIB was between 0 and 11 in our study. (Average 3.75). The authors found a nodal metastasis to level IIB to be uncommon even in the presence of a nodal metastasis to level IIA (Table 2).

Metastases at level IIB were observed only in combination with other levels, as was observed by Manola et al.6 in the oral tongue carcinoma. They also found no occult metastasis to level IIB. Similar results were found in our study, as there was no occult metastasis to level IIB alone. For N0 necks, they advocated relatively conservative procedures in the form of sentinel node biopsy aided by lymphoscintigraphy.

Patients with a small primary tumor in the oral cavity and negative nodes on clinical examination should be considered for elective neck treatments as there is chance of occult nodal metastases and the tendency to regional recurrences.6 Rajan et al.2 evaluated whether or not patients treated with a therapeutic selective neck dissection for a head and neck squamous cell carcinoma were oncologically disadvantaged compared with those having comprehensive procedures. They concluded that patients undergoing an aggressive neck surgery had a more extensive disease. A selective neck dissection can be used to effectively treat a clinically positive nodal disease in selected patients. Ferlito et al.12 evaluated the optimal elective treatment of the neck for patients with a supraglottic and glottic squamous carcinoma. They concluded that SND of sublevel IIA and level III appears to be adequate for an elective surgical treatment of the neck in a supraglottic and glottic squamous carcinoma.

Preserving level IIB may help reduce the morbidity owing to the damage of spinal accessory nerve. Appropriate case selection according to a particular site may be necessary when level IIB is preserved. Tongue carcinomas may be considered as a separate site owing to their more aggressive nature.

All visible nodes in the submascular triangle (level IIB) are not metastatic nodes. A dissection of this subgroup may be done only in a selected group where there is a metastatic node at level IIA. The dissection leads to more chances of spinal accessory injury, thereby causing a shoulder dysfunction.