Papillary carcinoma is the most common variant of thyroid cancer. A tumor less than 1 cm in size is labelled as the papillary thyroid micro-carcinoma (PTMC). Such tumors have an excellent prognosis, although a few may metastasize to cervical neck nodes. However, an infiltrated palpable neck node without evidence of thyroid disease is rare. Here, we report a case of an isolated submandibular metastasis from a clinically occult papillary thyroid carcinoma in a 40-year-old woman. The initial surgery was performed on the basis of the fine needle aspiration cytology (FNAC) report of basal cell adenoma vs cellular pleomorphic adenoma. The case was a total histopathological surprise as it was reported as a metastasis from papillary thyroid carcinoma. Subsequently total thyroidectomy and modified neck dissection was performed as per the standard surgical guidelines.

A 40-year-old woman presented with the right side submandibular swelling for 3 years which was gradually progressive in nature. There were no other troublesome symptoms reported by the patient such as pain or increase in size during the meal. No other significant medical history could be elicited.

A complete submandibular mass excision was carried out on the right side and the specimen was subjected to histopathological examination. To our surprise, the biopsy report came out with a final diagnosis of papillary carcinoma favoring metastatic mass (Fig. 1).

The patient subsequently underwent total thyroidectomy with the right-side modified neck dissection (MND) type III (levels I–V) along with a bilateral central compartment clearance. Complete specimen along with neck nodes was sent for histopathological examination which revealed differentiated papillary carcinoma involving the upper pole of the right lobe of thyroid with scanty foci of extrathyroidal extension and nodal metastasis (Fig. 2).

The 100 μCi neck scan was ordered a month later which showed an iodine uptake of 0.92% with no active foci (probably due to iodine interference). A large dose scan after 3 months followed with 122 μCi of I131 was given orally. No evidence of any recurrence or nodal presentation is noted in the follow-up period, till date.

A papillary variant is the most common form of thyroid cancer and commonly remains clinically silent until its incidental histological diagnosis in surgical material or at autopsy. Nodal metastases relating to papillary thyroid carcinoma commonly involve the central compartment. Submandibular nodal metastases are rare and are usually associated with extensive cervical metastases.1

Compared with other cancers, papillary carcinoma of the thyroid gland is a relatively indolent disease with a better survival rate.2 Papillary microcarcinoma is a morphological variant of papillary carcinoma, originally described in 1949 by Hazard et al.3 based on the size of the lesion. The upper limit of size to define papillary microcarcinoma is generally 10 mm. This case is unusual in the aspect that the metastasis was confined to a single site in the right submandibular space without cervical lymphadenopathy.

Patients with clinical occult thyroid papillary carcinoma may rarely present with metastatic neck nodes.4 Distant metastases from an occult papillary thyroid carcinoma are extremely rare. To our knowledge, there have been only a few reports of an isolated metastasis from an occult papillary thyroid carcinoma to the submandibular gland. The rarity of this occurrence can be appraised from the fact that only 1–4% of all head and neck tumors are malignant neoplasms of the major salivary glands.5 Metastatic tumors account for approximately 3% of malignant salivary gland neoplasms and only 10–20% of such metastatic tumors occur in the submandibular glands.5 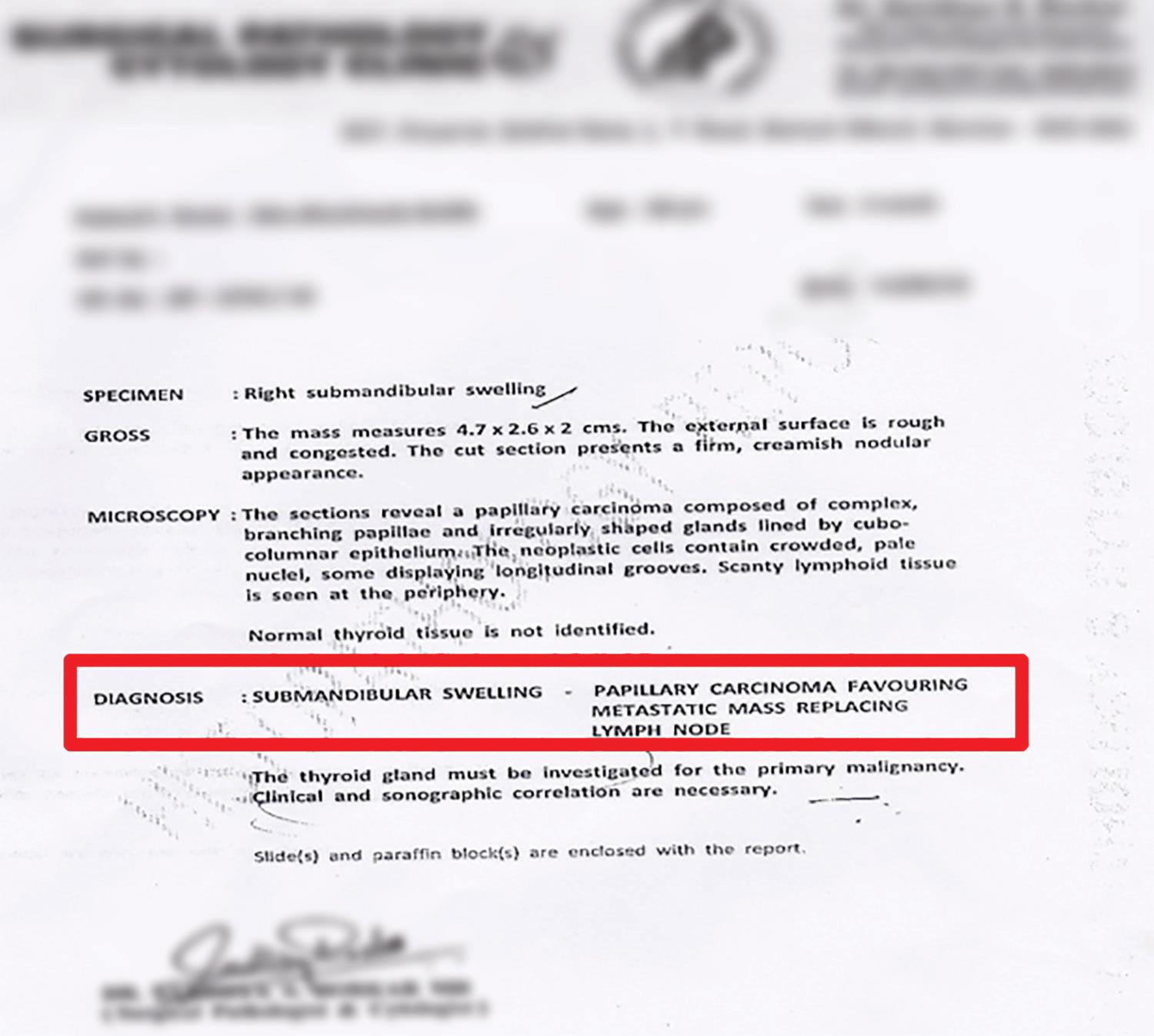 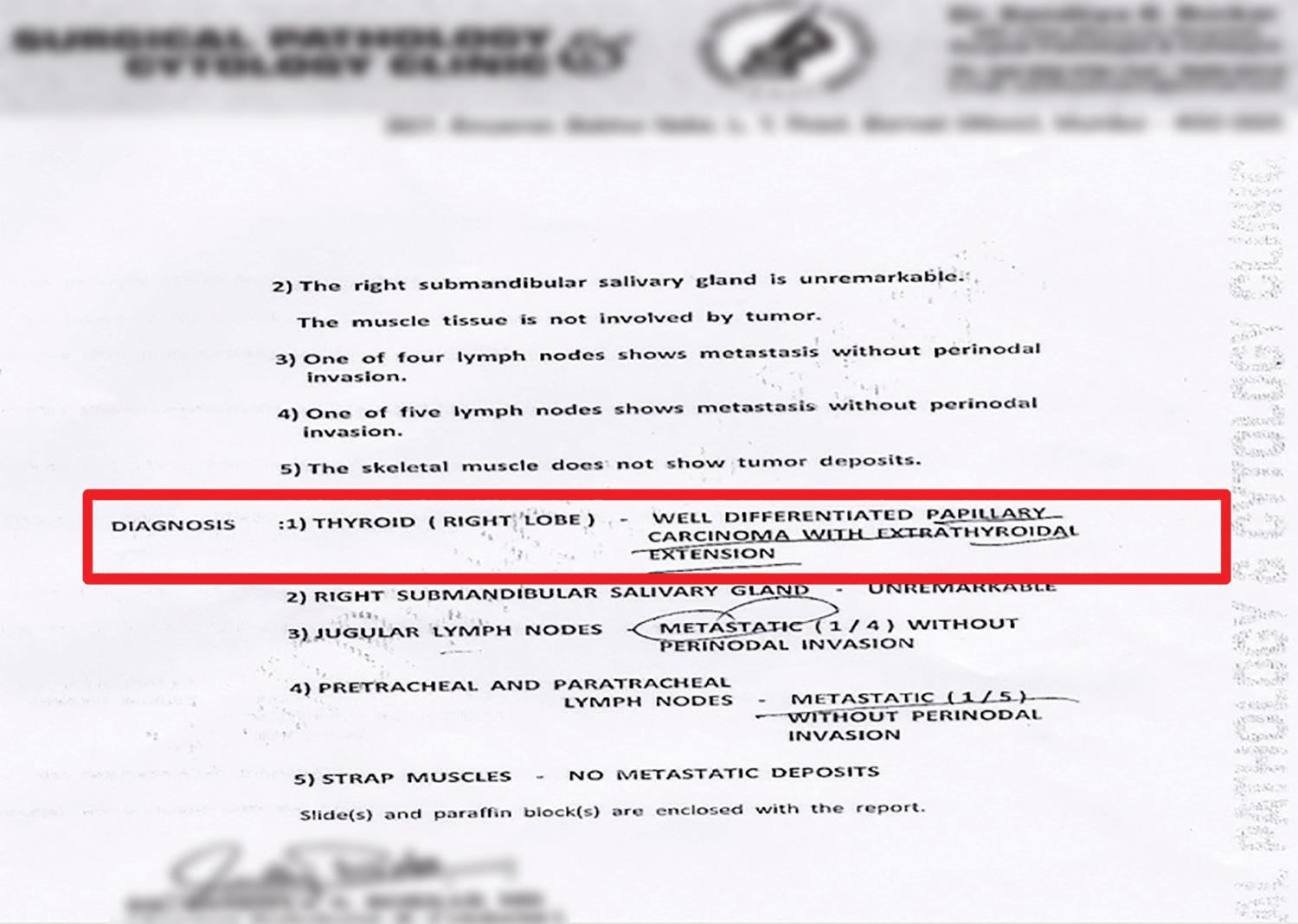 Fine needle biopsy (FNB) cytology of a cervical lymph node has been proposed as a very useful procedure to discover occult thyroid carcinoma lying within the node.9 However, other studies have reported 29–43% and even 50% of non-diagnostic or false-negative results in FNB cytology of the affected lymph node. The possibility of false-negative diagnosis is even higher in the case of cystic degeneration of the lymph node metastasis10 because the classical pathologic features of PTMC, such as papillae and psammoma bodies, may be sparse or not present, and nuclear abnormalities may be the only finding.11 Therefore, negative FNB cytology results cannot safely exclude the thyroid origin of the lesion.

In conclusion, a patient with PTMC presenting as a metastatic mass with no evidence of primary thyroid tumor in thyroid imaging and inconclusive lymph node FNB cytology is reported. In such cases, thyroid malignancy should be excluded. Lymph node excision and histological examination provide the definite diagnosis.