Angiolymphoid Hyperplasia with Eosinophilia: A Rare Swelling in the Oral Cavity Mucosa

Background: Angiolymphoid hyperplasia with eosinophilia (ALHE) is considered as a rare, benign vascular lesion that mainly affects the skin and subcutaneous tissues of the head and neck region, but is rare in the oral cavity. Its etiology and pathogenesis remains unclear and its diagnosis is based on the histopathological findings. Here we report a case of ALHE showing a swelling in the oral cavity mucosa.

Case description: A 24-year-old female presented to our outpatient department with the complaints of a painless swelling in the oral cavity on the right cheek since 1 month. The patient underwent excision of the swelling intraorally, and diagnosis of ALHE was made based on the histopathological findings of a chronic inflammatory infiltrate admixed with proliferating blood vessels.

Conclusion: ALHE is rare in the oral cavity mucosa and can present a diagnostic dilemma.

Clinical significance: ALHE should be considered as a differential diagnosis of a submucosal swelling in the oral cavity and complete excision of the swelling helps in both diagnostic and definitive treatments.

The term angiolymphoid hyperplasia with eosinophilia (ALHE) was coined by Wells and Whimster in 1969 to describe a distinct neoplasm characterized by a florid proliferation of blood vessels lined by plump endothelial cells and admixed with a dense inflammatory infiltrate of lymphocytes, eosinophils, and mast cells.1

Histopathologically, ALHE is characterized by well-formed vessels, which are frequently immature, delineated by an endothelium of epithelioid cells associated with an abundant chronic inflammatory infiltrate.3

Angiolymphoid hyperplasia with eosinophilia can involve any part of the head and neck, including maxillary bones, salivary glands, muscle tissues, and the skin. The oral mucosa is an uncommon target and there are few reports in the literature, but, when it is involved, the sites affected most often are the lips, the buccal mucosa, and the tongue.4 Here we report a case of ALHE in oral cavity mucosa that presented a diagnostic dilemma.

A 24-year-old female presented to our outpatient department with the complaints of a swelling in the oral cavity on the right cheek since 1 month that was insidious in onset and gradually progressive in size. There was no history of pain over swelling, discharge from the swelling, fever, trauma, and skin lesions in the body.

On examination, an oval-shaped solitary swelling (2 × 2 cm in size) was present in the right buccal mucosa extending anteriorly 2 cm from lip commissure, posteriorly 1 cm from the retromolar trigone, superiorly 1 cm below upper gingivobuccal sulcus, and inferiorly 2 cm above lower gingivobuccal sulcus, as shown in Figure 1. The swelling was nontender, firm in consistency, mobile, and the skin over swelling in the cheek on the external aspect was pinchable. 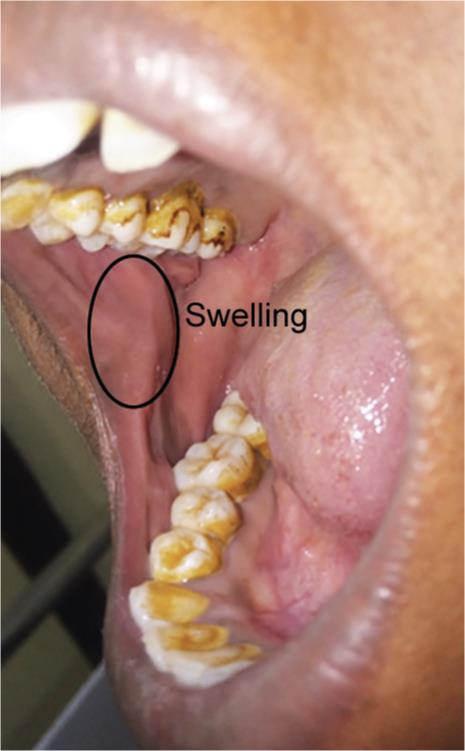 Fig. 1: Swelling in the right buccal mucosa of the patient 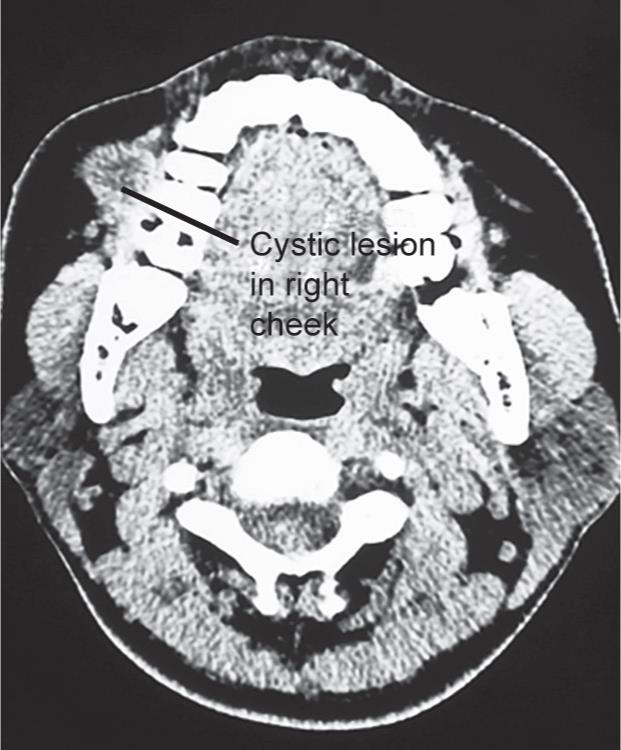 Fig. 2: A CT scan (axial view) showing a well-defined circular and peripherally enhancing cystic lesion over the right cheek in the subcutaneous plane

On the basis of the various differential diagnosis (mucous retention cyst, parotid duct tumour, parasitic cyst, parotid abscess), a CT (computerised tomography) with contrast of the face with the neck was done, which showed a well-defined circular peripherally enhancing cystic lesion measuring 20 × 19 mm over the right cheek in the subcutaneous plane with central hyperdense foci and minimal perilesional edema probably suggestive of a parasitic cyst or an abscess, as shown in Figure 2.

Owing to this diagnostic dilemma, the patient was treated with intravenous antibiotics (ceftriaxone, metronidazole based on body weight) initially for 7 days, which did not decrease the size of the swelling and then the patient underwent excision of the swelling intraorally under general anesthesia and the specimen was sent for histopathological examination (HPE).

Postoperatively, the surgical wound healed well by fibrosis and patient had no complications. On follow-up of 8 months, the patient did not show any recurrence of the symptoms or fresh complaints. 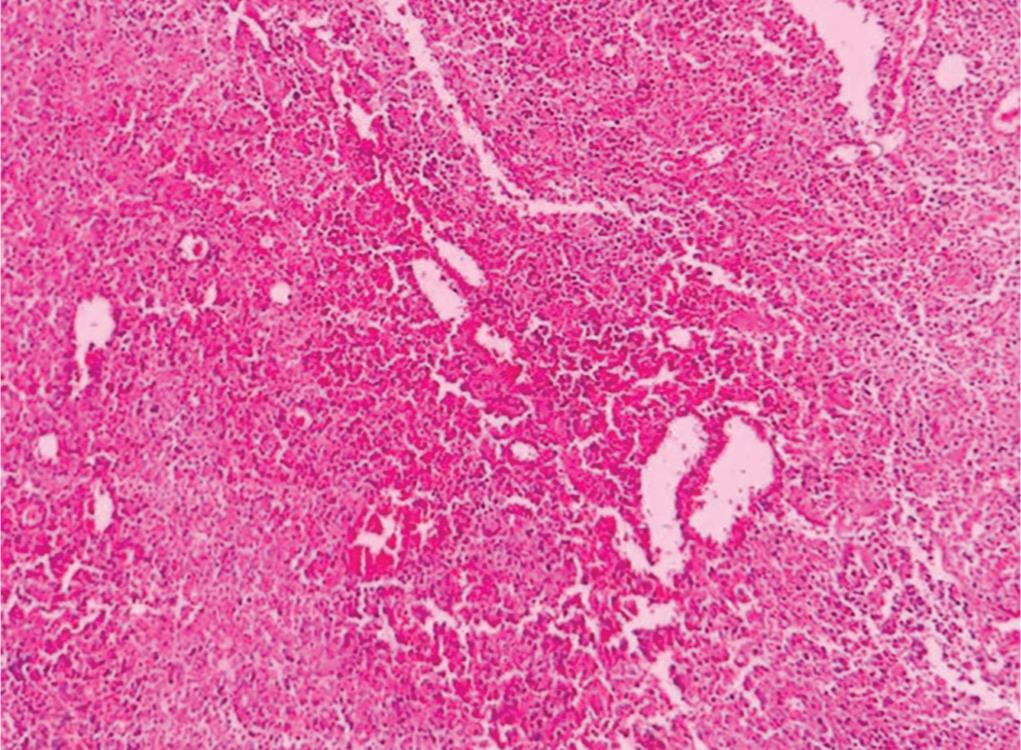 ALHE is seen most commonly in Asians, followed by whites and less common in blacks. ALHE is slightly more prevalent in females though a male predominance has been noted in selected Asian studies. It presents most commonly in patients aged 20–50 years, with a mean onset of 30–33 years.5

Clinically, ALHE presents as single or multiple pink to reddish-brown papules or subcutaneous nodules that are usually located on the head and neck (85%), and especially in the preauricular region.6 Lesions in the oral mucosa are extremely rare, and when it occurs, it most commonly affects young male adults.7 In our case, the patient presented with a subcutaneous swelling in the cheek and lesion was gradually progressive in size.

Histologically, there is both a vascular and an inflammatory component. The lesions consist of small blood vessels surrounded by enlarged endothelial cells as well as aggregates of noncanalized, plump endothelial cells.8 There is a dense perivascular and interstitial infiltrate of lymphocytes, plasma cells, and eosinophils. There is some evidence for the existence of arterial structures among venules, which may suggest the presence of arteriovenous shunts.9 In our patient, the diagnosis was based on the histopathological findings of chronic inflammatory infiltrate admixed with proliferating blood vessels.

The most common therapeutic options are surgical excision and pulsed dye laser. Other options include radiotherapy, curettage, shave excision with electrodessication, cryotherapy, corticosteroids (topical, systemic, or intralesional preparation), and laser therapy. Continuous wave carbon dioxide and argon lasers have been successfully used, but there is a risk of scarring after treatment. Anecdotal reports have described other successful therapeutic options: intralesional interferon alpha-2a, indometacin farnesil, pentoxifylline, chemotherapeutic agents such as vinblastine, mepolizumab (anti-interleukine-5), and imiquimod. Furthermore, oral retinoids have been employed with different results.10

ALHE is rare in oral cavity mucosa and can present with a diagnostic dilemma.

ALHE should be considered as a differential diagnosis of submucosal swelling in the oral cavity and complete excision of the swelling helps in both diagnostic and definitive treatments.

The authors are thankful to the patient for allowing to report the case.