Onchocerciasis in the Orbital Region: An Unexpected Guest From Tropics

Background: Onchocerciasis is the world’s second commonest infectious cause of blindness. It is transmitted by the bite of the Simulium blackfly, which transmits the infective-stage larva into the human skin and mainly affects the people in the rural areas of Sub-Saharan Africa, Yemen, and those living in parts of Central and South Africa. The first case of ocular onchocerciasis in India was a woman from rural Assam, northeastern India reported in 2011. Here we report a rare case of onchocerciasis—a patient from a non-endemic region of Bengaluru, India, showing a swelling in the orbital region.

Case description: A 55-year-old women was presented to our outpatient department with the complaints of a swelling below the left eyebrow since 2 months and drooping of the left upper eyelid since 1 month. The patient underwent excision of the swelling after CT and FNAC of the swelling. The worm in the wall of the excised cyst was identified as Onchocerca volvulus, on the basis of morphological features observed in histopathology. The patient was treated with a single oral dose of Ivermectin (150 μg/kg), and on follow-up at 4 months, she has not shown any recurrence of symptoms or fresh complaints.

Conclusion: Onchocerciasis, though rare, can be a differential diagnosis of a subcutaneous swelling in the body.

Clinical significance: Knowledge and awareness regarding the presence of this filarial worm in India is required, as it is rare and reporting of further cases needs to be done.

Onchocerca volvulus is a spirurid nematode from the Superfamily Filarioidea and family Onchocerciadae. The disease caused by onchocerca tends to mainly affect the rural poor of Sub-Saharan Africa, Yemen, and parts of Central and South Africa.1 It appears that humans are the main reservoir of onchocerciasis, with infection occurring from the bite of an infected female blackfly, Simulium species, which require fast-flowing water for their breeding and development.2

Humans become infected with the third-stage larvae by the bite of female Simulium damnosum or other blackfly vectors. The larvae undergo two molts before developing into adult worms; they cause characteristic fibrous nodules in humans. Unsheathed microfilariae produced by a viviparous female migrate to different parts of the body, including the eyes. In the eye, they provoke an immune response, leading to inflammatory lesions and progressive eye damage, and sometimes also causing blindness, known as “river blindness.”1

Here we report a rare case of onchocerciasis that was identified on a histopathological examination from the excised swelling around the patient’s eye in a nonendemic region that presented a diagnostic dilemma.

A 55-year-old lady presented to our outpatient department with the complaints of a swelling below the left eyebrow since 2 months, which was insidious in onset and gradually progressive in size. She also complained of drooping of the left upper eyelid since 1 month. There was no history of trauma, discharge from the swelling, pain over the swelling, difficulty in vision, nasal block, nasal discharge, headache, any other swelling, or skin manifestations in the body.

On examination, a solitary swelling (measuring about 2 × 1 cm) was present above the left upper eyelid approximately 1 cm below the medial part of the superciliary ridge and 1 cm lateral to the nasion, oval in shape, and with a smooth surface. The swelling was nontender, firm in consistency, nonreducible, noncompressible, freely mobile, the skin over swelling was pinchable, and had no colour changes, as shown in Figure 1.

An ophthalmic evaluation was done by an ophthalmologist, and the patient was found to have a mechanical ptosis of 2 mm in the left eye compared to the right with normal vision, extraocular movements, and the fundus study was normal.

Considering various differential diagnosis (benign adnexal tumor, frontal mucocele, dermoid cyst, parasitic cyst, and lacrimal sac tumor), a computerised tomography (CT) of orbit with paranasal sinuses was done, which showed a well-defined extraconal soft-tissue lesion with central nonenhancing cystic areas in the superomedial aspect of the periorbital region on the left side probably suggestive of abscess, as shown in Figure 2. 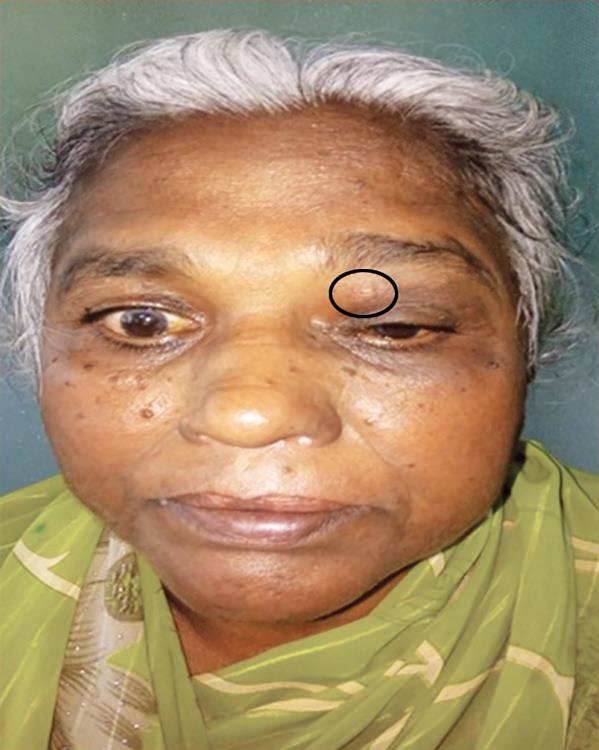 Fig. 1: A swelling around the left eye with drooping of the upper eyelid

Fine needle aspiration cytology (FNAC) of the swelling was done in which smears showed scant cellularity composed of benign epithelial cells scattered in singles with a round bland nucleus and abundant cytoplasm. Few spindle cells and inflammatory cells were seen against the hemorrhagic background. No atypical cells were seen in the smears. All features were suggestive of a benign neoplasm, possibly an adnexal tumor.

Patient then underwent excision of the swelling under general anesthesia and specimen was sent for a histopathological examination (HPE). 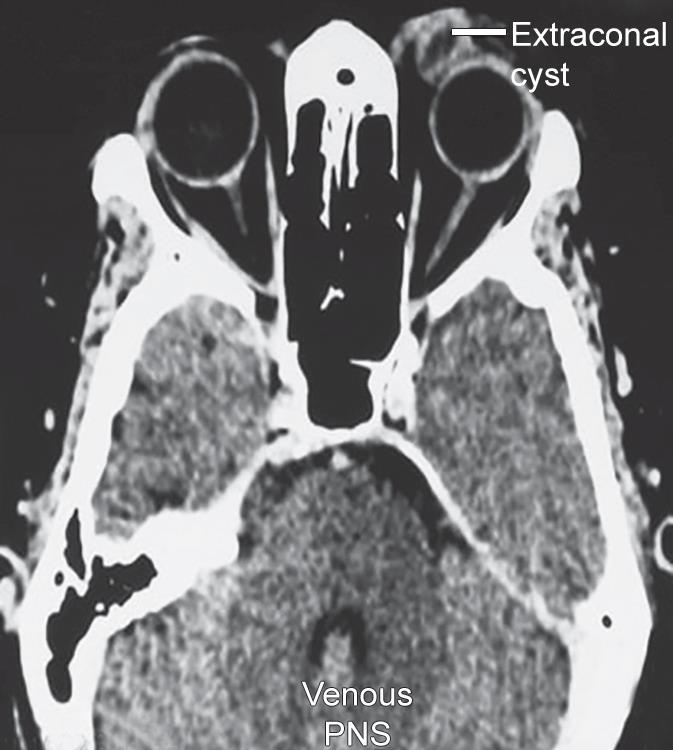 Fig. 2: A CT scan showing a well-defined extraconal cyst in the superomedial aspect of the periorbital region on the left side

The patient was treated postoperatively with a single oral dose of Ivermectin (150 μg/kg; maximum 12 mg). In the postoperative period, the patient had no complications, the surgical wound healed well and the mechanical ptosis also decreased. The patient is under follow up since 4 months with no fresh symptoms or recurrence of the swelling.

Onchocerca is a filarial nematode that is known to cause multiple skin manifestations. However, the most important presentation of onchocerciasis is its ophthalmologic manifestations, which are also commonly referred to as “river blindness.”3

The infection occurs from the bite of an infected female blackfly, Simulium species. After biting an infected person and ingesting the microfilariae, the microfilariae mature to the larval stage as they migrate to the proboscis of the fly. There, the larvae may be injected into a human with the next bite, resulting in the formation of an adult worm capable of producing microfilariae. These microfilariae migrate throughout the skin and connective tissue, where they die after several years. Adult worms may live in the subcutaneous tissue for years, with a female producing 0.5–1 million microfilariae yearly (Fig. 4). It is the migration of microfilariae through the skin and connective tissue, as well as the host’s response to the migration that is responsible for the majority of clinical findings in onchocerciasis.4

The first reported case of ocular onchocerciasis (Onchocerca volvulus) in India was in a woman from rural Assam, northeastern India in 2011.5 Here we report a rare case of onchocerciasis in a nonendemic region of Bengaluru. In our case, we identified the worm Onchocerca volvulus based on the histopathological features of the excised swelling. The cyst wall of the excised swelling consisted of the worm, which had a thick outer wall with an underlying muscular tissue and a gravid uterus.

The diagnosis of onchocerciasis is accomplished by a combination of clinical symptoms and signs with a histopathologic examination of specimens. A slit lamp examination may confirm the presence of microfilariae in the anterior chamber in ocular involvement. A sclerocorneal punch biopsy may aid in the diagnosis as well. Rarely, microfilariae are demonstrated in blood and/or urine samples. PCR may aid in the diagnosis of disease associated with a low burden of microfilariae. Xenodiagnosis, using laboratory bred blackflies, may provide a clue as well.6 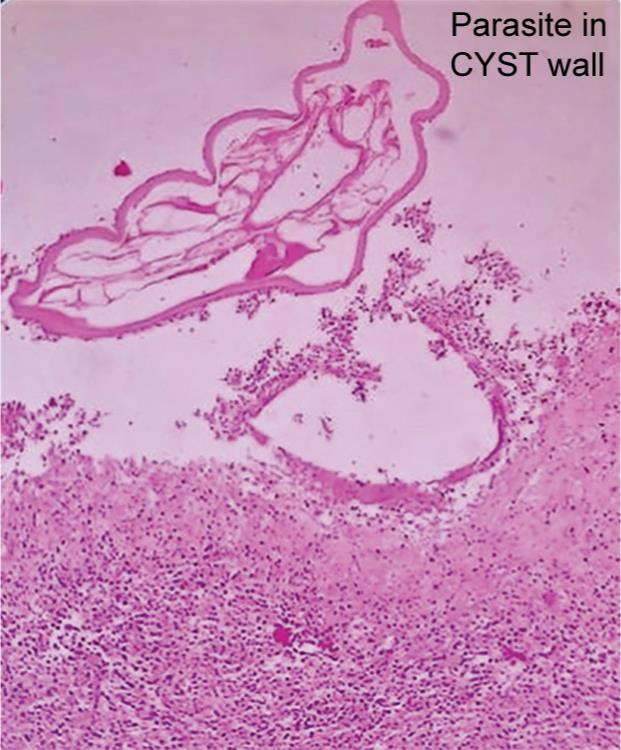 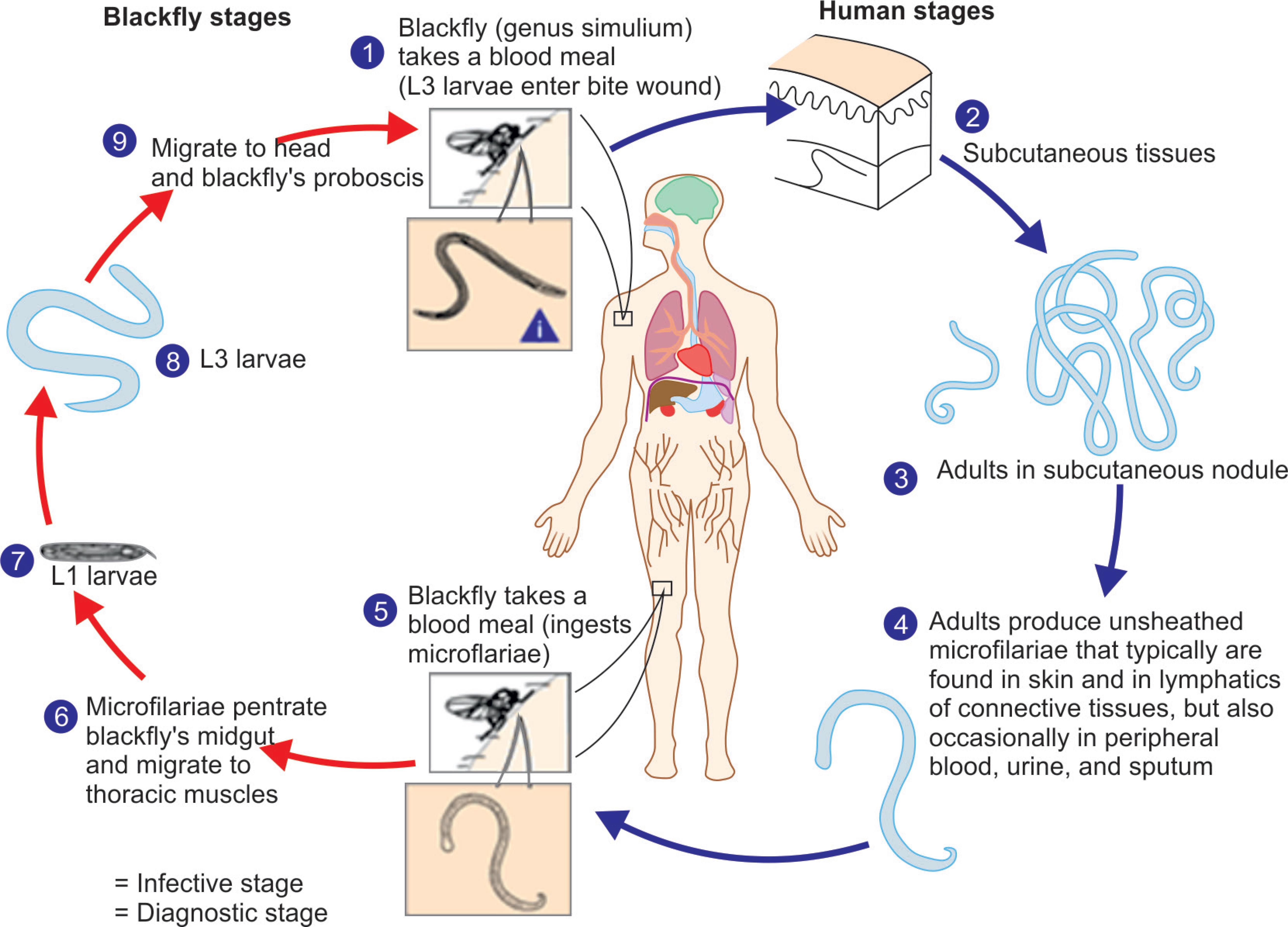 Traditional therapy has centered on the use of DEC, but this is active only against microfilariae, allowing adult worms to repopulate the microfilariae in several months.7 Ivermectin is the recommended treatment for microfilaria but has no effect on the adult worms.8 Medicines Development for Global Health (MDGH) and the World Health Organization Special Program for Research and Training in Tropical Diseases (TDR) announced in June 2018 that the US Food and Drug Administration (FDA) has approved oral moxidectin (8 mg) for the treatment of onchocerciasis in patients aged 12 years and older.9

Our patient was treated with a single oral dose of ivermectin (150 μg/kg) postoperatively. At 4 months of follow-up, the patient has not shown recurrence of the swelling or any fresh symptoms.

Onchocerciasis, though rare, can be a differential diagnosis of a subcutaneous swelling in the body.

Knowledge and awareness regarding the presence of this filarial worm in India is required as it is rare and reporting of further cases needs to be done.

The authors are grateful to the patient for allowing to report the case, as it is rare.