Epidemiological Study of Different Syndromes in 300 Deaf and Mute Children

Objective: To study the epidemiological aspects of syndromic hearing loss (HL) in deaf and mute children below 15 years of age.

Materials and methods: The study “Epidemiological study of different syndromes in 300 deaf and mute children” was conducted on 300 deaf and mute children below 15 years of age at Rohtak (Haryana) from August 2013 to July 2014. Three hundred deaf and mute candidates were included in the study from various schools for deaf and mute children in the Rohtak city and deaf and mute children attended the ENT outdoor at the Department of Otolaryngology and Head and Neck Surgery, Pandit Bhagwat Dayal Sharma Post Graduate Institute of Medical Sciences, Rohtak, Haryana, India, for the evaluation of their deafness. Information regarding patient’s age, sex, religion, age of presentation, residence, family history of deafness, consanguineous marriage in the family, socioeconomical status of the family, literacy and occupation of the parents, and developmental history of the candidate was recorded from the parents and guardians using a standard questionnaire. Audiological tests were done to determine the type and the degree of HL.

In 2005, the WHO estimated that there are 278 million people worldwide with bilateral moderate to profound hearing loss (HL), of whom, 62 million have deafness. Two-thirds of people with moderate to severe HL live in the developing country. Genetic causes are the most common cause of HL in the developed countries. Syndromic forms constitute about one-third of genetic HL and remaining two-thirds form nonsyndromic HL. Among the nonsyndromic HL, a large majority (70–80%) of cases are autosomal recessive often characterized by being profound and prelingual. Autosomal dominant forms tend to present later and results in progressive postlingual HL.

We are trying to discuss deafness briefly in a stepwise manner, first various classifications of deafness, then various causes of deafness, and lastly evaluation and management of a deaf child.

Inclusion criteria for the candidate were all deaf and mute children below 15 years of age. Exclusion criteria used were children who were complaining only HL without any speech and language problems like who were suffering from serous otitis media, acute and chronic otitis media, and other common causes of HL. Audiological tests would be done to determine the type and the degree of HL.

Blood investigations and imaging study were done whenever necessary. Consent for history taking, clinical examination, and any intervention was taken from parents and guardians of the candidate.

The study included a total of 300 deaf and mute children, out of which, 236 cases were from various schools for deaf and mute at the Rohtak city, Haryana, and 64 cases were those who came to ENT OPD for the evaluation of their deafness.

From the data, we can see that nonsyndromic HL is much more common than syndromic HL (Table 1).

The role of various epidemiological factors in syndromic and nonsyndromic HL that were observed in our study are listed below.

In the present study, we found that age-wise distribution of deaf and mute children in both groups was the same. The syndromic HL group cases presented slightly earlier (first 3 years) than the nonsyndromic HL group (88.63% vs 76.56%) (Table 2 and Fig. 1). 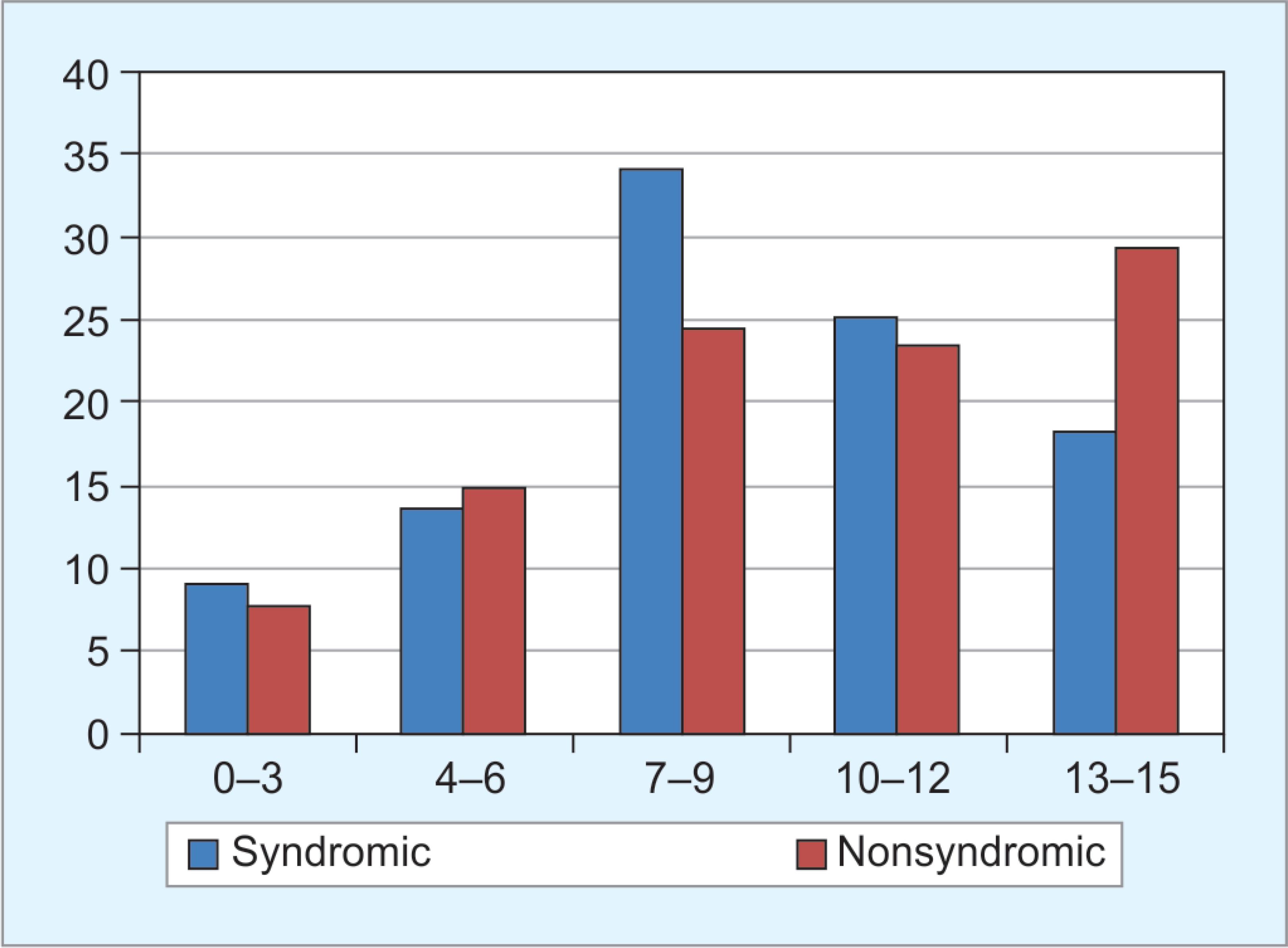 Fig. 1: Age wise distribution of cases in our study 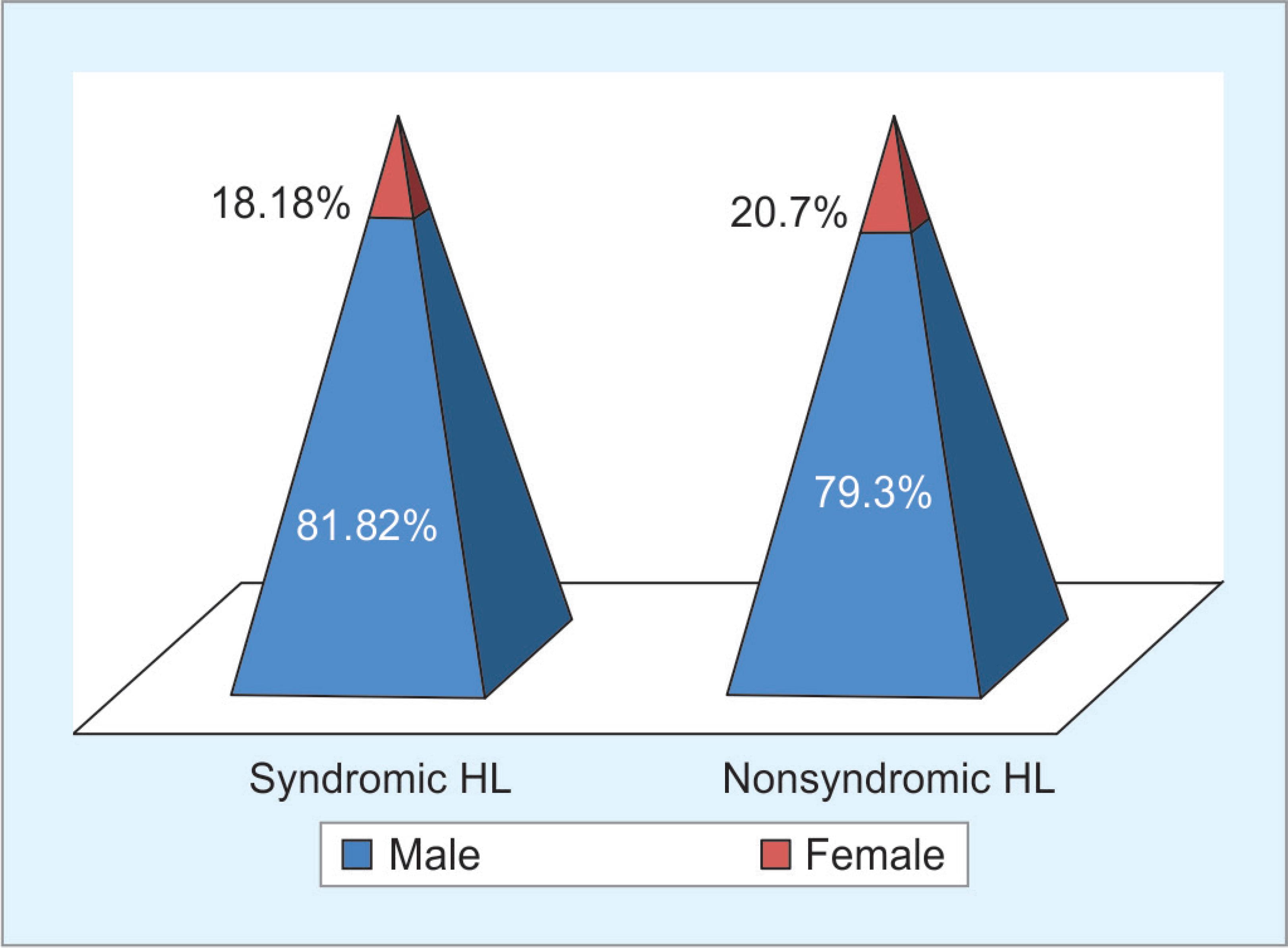 Family history was present in approximately 10% in both syndromic HL and nonsyndromic HL groups (Table 7). Maternal illiteracy is strongly associated with congenital HL (Table 8). Most of these cases had a history of hospital/ICU admission for their management (Table 9).

We found typical syndromes in just 1.66% of cases with the most common being the Waardenburg syndrome (0.66%). Treacher Collins syndrome and Congenital rubella syndrome were found in 0.33% cases each (Table 10) so that an early diagnosis of deafness can be suspected and intervention can be done as early as possible.

Deafness is defined as the disability of using hearing as the primary channel for receiving speech even with amplification.1 HL, hence, affects various related aspects of child’s overall development as the development of speech and language is impaired. It also hampers the child’s social and emotional relationship.2

Deafness is found to occur in 1 per 1000 live births, and almost 50% of congenital deafness is hereditary.3 Over 70% congenital sensorineural hearing impairment are nonsyndromic, while about 30% are associated with other defects.4

Mozaria et al. reported an incidence of syndromic HL in 3.5% of cases. Genetic HL may appear as a part of syndrome.7

In the present study conducted in 300 deaf and mute children, we found 44 cases of syndromic HL, which constitutes 14.66% of the study population (Table 1). Out of 44 syndromic HL cases, 10 cases were those who came to our department for the evaluation of their deafness, while the rest of the cases were from various schools for deaf and mute children. Only 10 cases were below 6 years of age, while a majority of cases (34 (77.27%)) were between 6 and 15 years of age. Reddy et al. also found a similar age distribution in their study.5

A study done by Elango et al. found that HL was diagnosed in only 19% of children by the age of 2 years.8 Tschopp observed that hearing handicap was recognized at an average age of 2 years.9

It is found that if diagnosis and intervention take place before 6 months of age, an almost age-appropriate level of language skill can be established. So in 2009, the Joint Committee on infant hearing has endorsed Universal Newborn Hearing Screening (UNHS). The aims of UNHS are to provide hearing screening to all newborns before the age of 1 month, confirmation of HL in infants who do not pass the initial or a subsequent screening, through an audiologic evaluation by the age of 3 months so that comprehensive treatment can be initiated before the age of 6 months.

Clifton and Swart in a study with 169 children found that a majority of cases were boys.10 Zazouk also found an increased risk of deafness with male sex.11 However, Walch et al. found the male to female ratio of approximately 1:1.12

In our study, acquired causes were present in nine (20.45%) cases. History of birth asphyxia was present in two cases, low birth weight in three cases, maternal drug intake in two cases, meningitis in one case, and one case presented with the Rubella syndrome. However, we could not find any specific cause in 29 (65.90%) cases (Table 9).

Reddy et al. found that acquired causes were present in 13.77% of cases and, in 71.01% of cases, no specific cause could be established.5 Clifton and Swart observed a family history of deafness in one-tenth of cases and, also in 30% of cases, no apparent cause could be established.10 Elango et al. reported acquired deafness in 35% of cases. They could not establish the cause in 28.4% of cases.8 Morzaria et al. found that common causes of bilateral sensorineural HL were idiopathic (41.5%), genetic nonsyndromic (27.2%), prenatal (11.5%), perinatal (9.7%), postnatal (6.6%), and genetic syndromic (3.5%).7 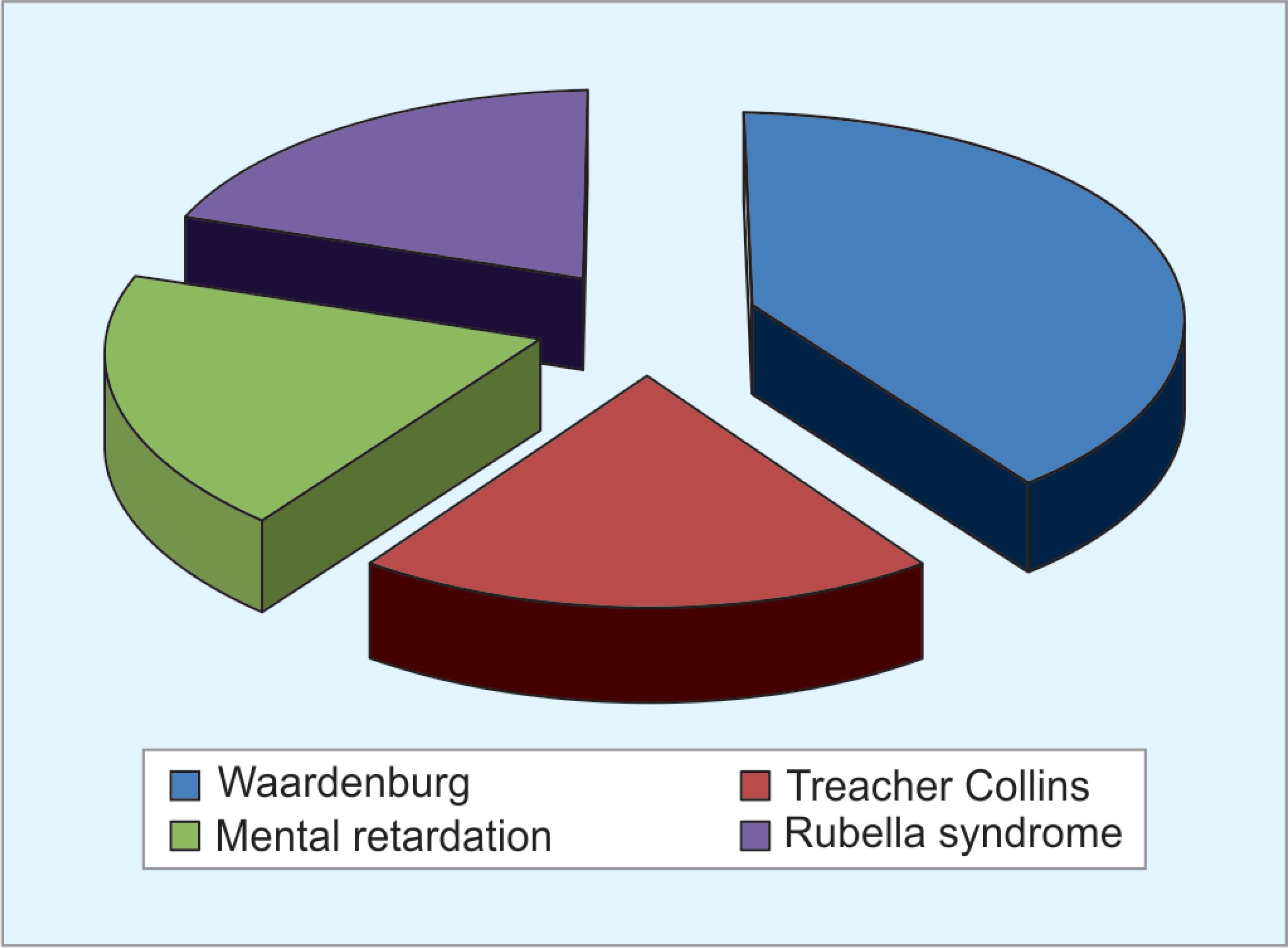 In our study, the most common system involved was the ocular system (18.18%) followed by craniofacial (9.09%). Deafness was cryptogenic in 50% of cases. Reddy et al. found ocular involvement in 24.46% of cases followed by skeletal involvement as the most common system involved in syndromic HL.5 Sutton and Rowe observed a high proportion of craniofacial abnormalities in children with hearing impairment and counted it to be a risk factor for deafness.14

We found typical syndromes in just 1.66% of cases with the most common being the Waardenburg syndrome (0.66%). Treacher Collins syndrome and congenital rubella syndrome were found in 0.33% of cases each (Table 10).

To diagnose the typical syndrome, we need an additional genetic study as most of the clinical features of syndromic HL may not be present at the time of presentation and also various syndromes show variable expressivity and penetrance. There is also a need to carry out further epidemiological studies on deafness so that there can be early identification of inherited syndromes and, thus, we will be able to provide adequate genetic counseling to parents.

11. Zazouk SM. Epidemiology and etiology of hearing impairement among infants and children in a developing country. J Otolaryngol 1997;26:335–344.