Aim: To highlight the management of huge multinodular goiters and report a rare case of intrathyroidal parathyroid adenoma.

Background: Goiter is an abnormal enlargement of thyroid gland. Huge goiters are a surgical challenge due to possible difficulty in intubation, tracheomalacia, retrosternal extension and distorted anatomy. Goiters associated with congenital hypothyroidism undetected at birth leads to permanent neurological deficits. This case report highlights a case of huge multinodular goiter with a rare intrathyroidal parathyroid adenoma detected on histopathology.

Case description: This case report deals with a 27-year-old male patient, presenting with huge hypothyroid multinodular goiter weighing 750 g with no compression symptoms. He had low IQ probably due to undetected hypothyroidism at birth. His postoperative histopathology report showed an intrathyroidal parathyroid adenoma which is an extremely rare tumor.

Conclusion: This report aims to emphasize the existence of congenital hypothyroidism and also that huge goiters when dissected meticulously may be removed without any major complications. We also report an incidental finding of rare intrathyroidal parathyroid adenoma.

Clinical significance: Neonatal screening of hypothyroidism and its subsequent treatment can prevent mental retardation. We would also like to emphasize the importance of preoperative serum parathormone and calcium levels in all patients undergoing thyroidectomy to detect asymptomatic parathyroid adenomas.

Goiter is an abnormal enlargement of thyroid gland.1 A benign nodular goiter usually does not cause obstructive symptoms like involvement of trachea, esophagus or recurrent laryngeal nerve.2

Congenital hypothyroidism is the most common congenital endocrine disorder commonly attributable to iodine deficiency in mothers.3 Endemic cretinism is more common in areas of Southern Europe, Bangladesh, China, India and Nepal.4 It is characterized by severely stunted physical and mental growth. It may be of two types; neurological and myxedematous. Morbidity may be reduced by early diagnosis and supplementation with thyroxine.4

Giant goiters weighing more than 500 g are associated with surgical challenge due to possible tracheomalacia, retrosternal extension, difficulty in intubation and intraoperative dissection of thyroid gland.7

Parathyroid adenomas are classified into adenomas, hyperplasia and carcinoma. Hyperparathyroidism presents with bone fracture, calculi of urinary tract and high serum calcium levels.5 Ultrasonography and radionucleotide (Tc99-sestamibi) imaging are tools of choice in diagnosing parathyroid adenoma.6 The prevalence of intrathyroidal parathyroid adenoma varies from 1.4% to 6% which results from abnormality during migration of parathyroid resulting in entrapment within thyroid gland. The use of SPECT provides excellent information on ectopic ademona.6

In this case report, we intend to discuss a case of huge multi-nodular goiter with history of cretinism and postoperative histopathology showing features of intrathyroidal parathyroid adenoma.

A 27-year-old male patient presented to ENT OPD of our hospital with complaints of swelling in front of the neck since childhood (Figs 1 and 2). The swelling grew slowly over the years to the present size. There was no history of any pressure symptoms. Due to delayed milestones and macroglossia, he was detected with hypothyroidism at 1 year of age and started on thyroxine supplements. At the time of examination, he was on thyroxine 100 μg daily. He gave history of 2 previous failed attempts at intubation for thyroidectomy in the previous hospitals and hence deferred surgery for a while.

General examination revealed a low IQ, pulse rate of 108/minute, BP—130/80 mm Hg. On examination of the neck, a 15 × 10 cm irregular swelling was noted extending vertically from at the level of hyoid superiorly to overhanging the clavicle inferiorly, and horizontally between the posterior borders of sternocleidomastoid. The lower border of swelling was palpable and we could get below the swelling. Carotids pulsations were more laterally palpable. No cervical lymphadenopathy noted. Indirect laryngoscopic examination was normal. 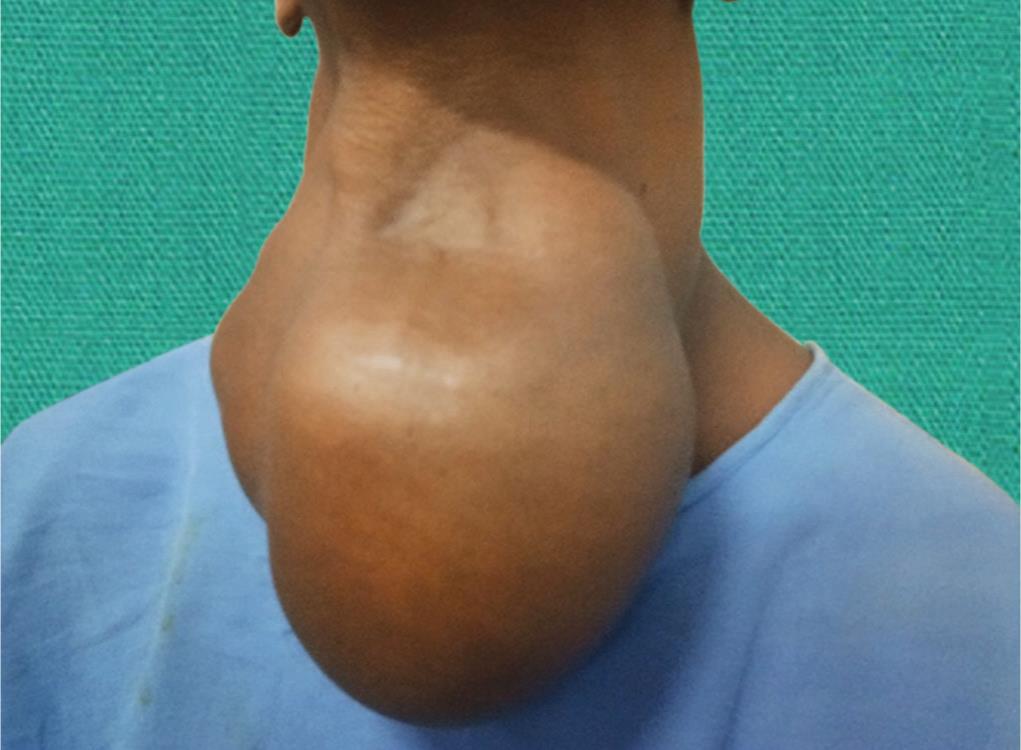 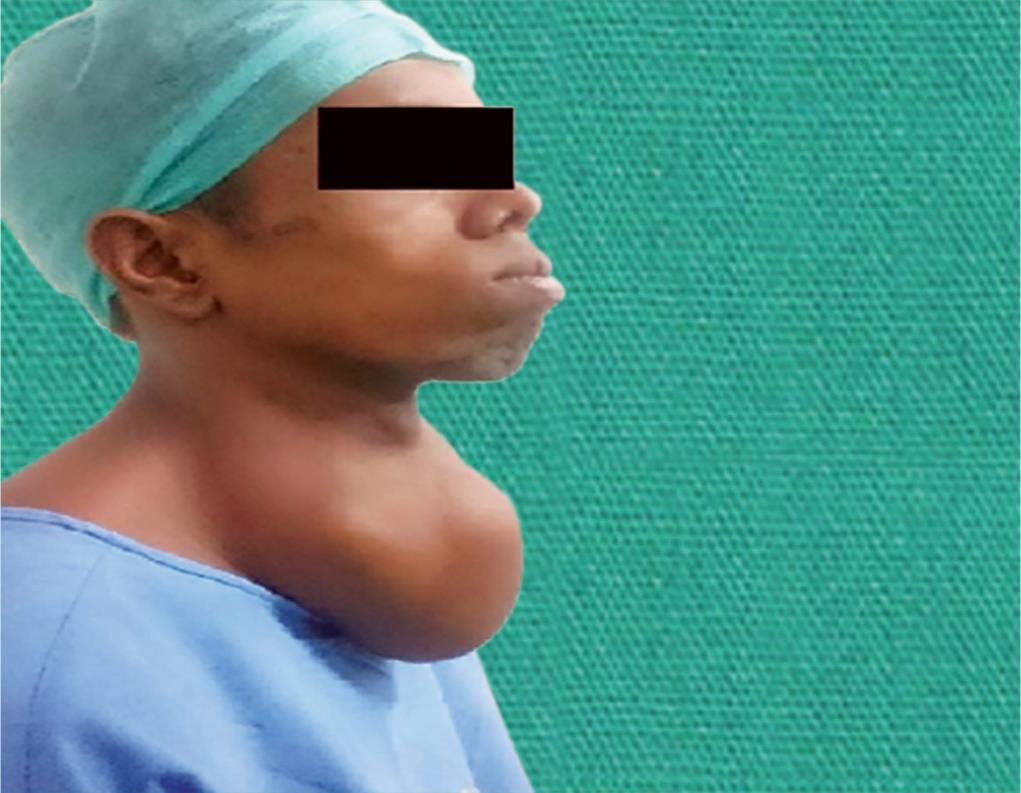 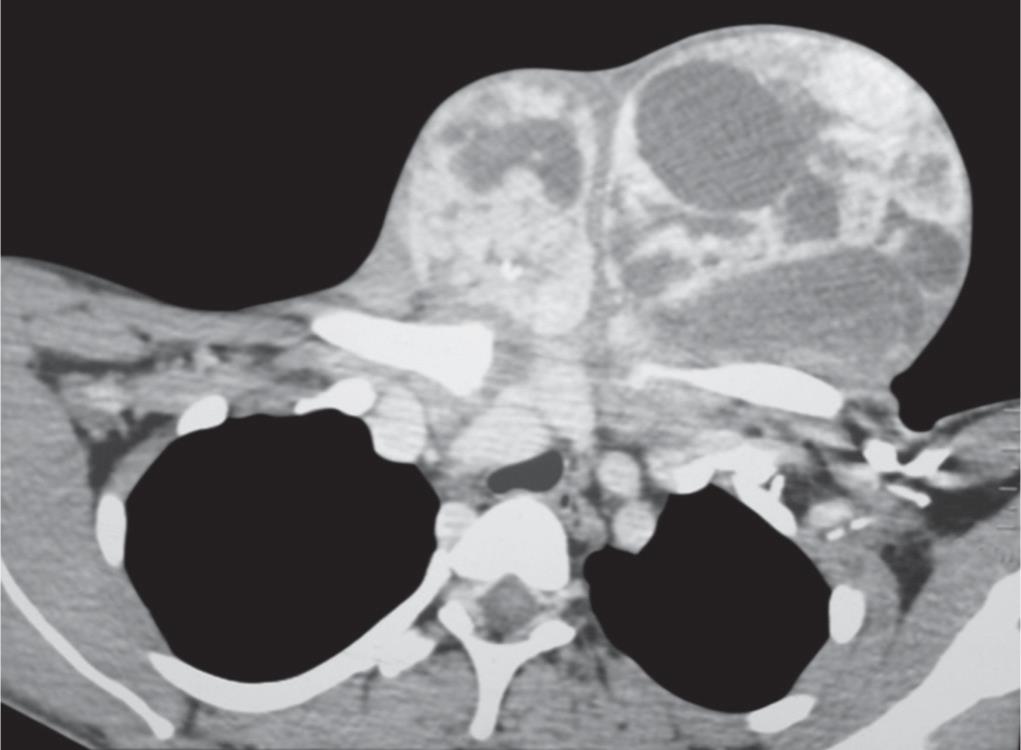 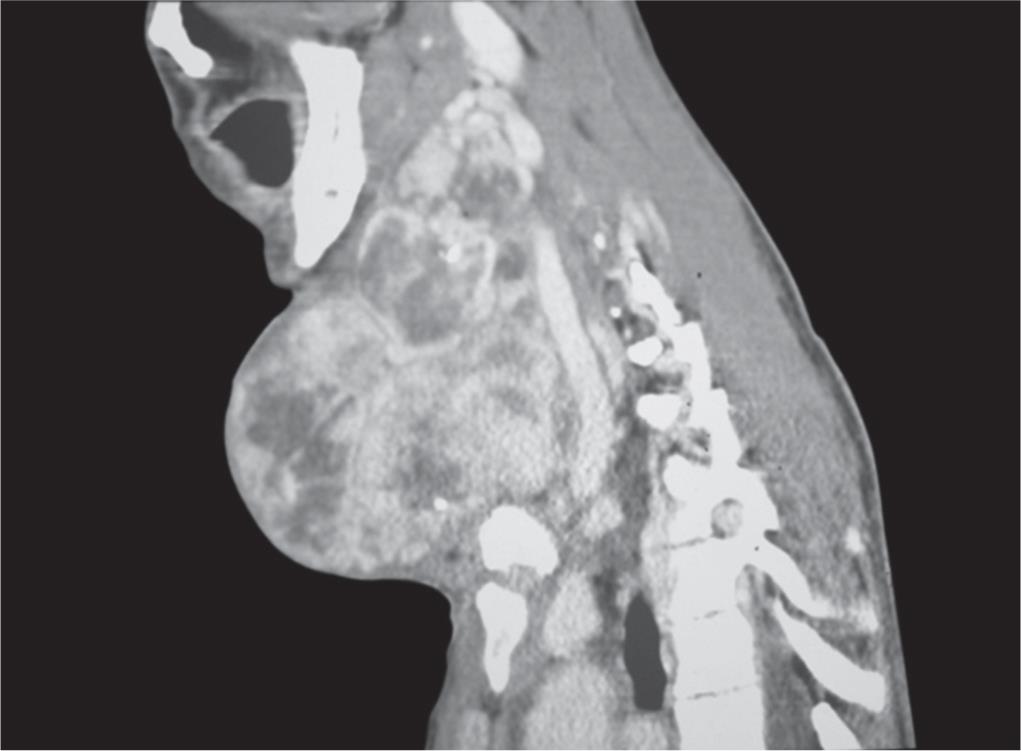 An elliptical skin incision was taken so as to remove the excessive lax skin. The strap muscles were stretched and thinned out and cut for the adequate visualization of the gland. Thyroid lobes were found to be highly vascular with multiple vessels overlying them (Fig. 5). Thyroidectomy was carried on the right and then on left. Due to distorted anatomy, recurrent laryngeal nerve, parathyroid glands could not be identified. The wound was sutured in layers. After inspection of vocal cords, patient was successfully extubated. 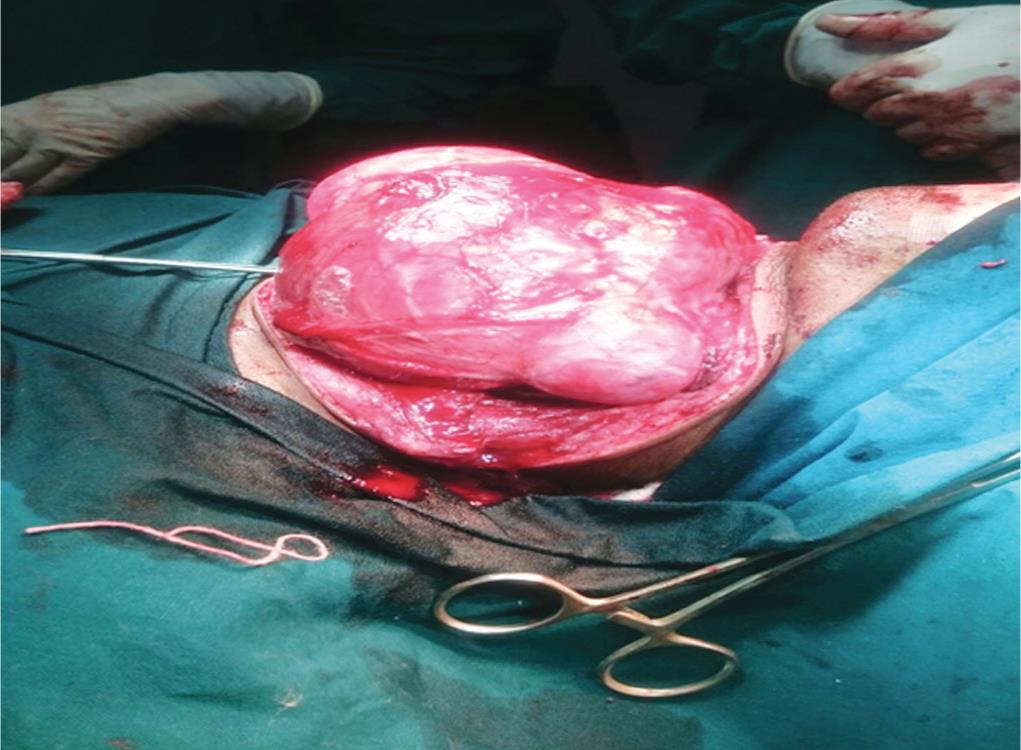 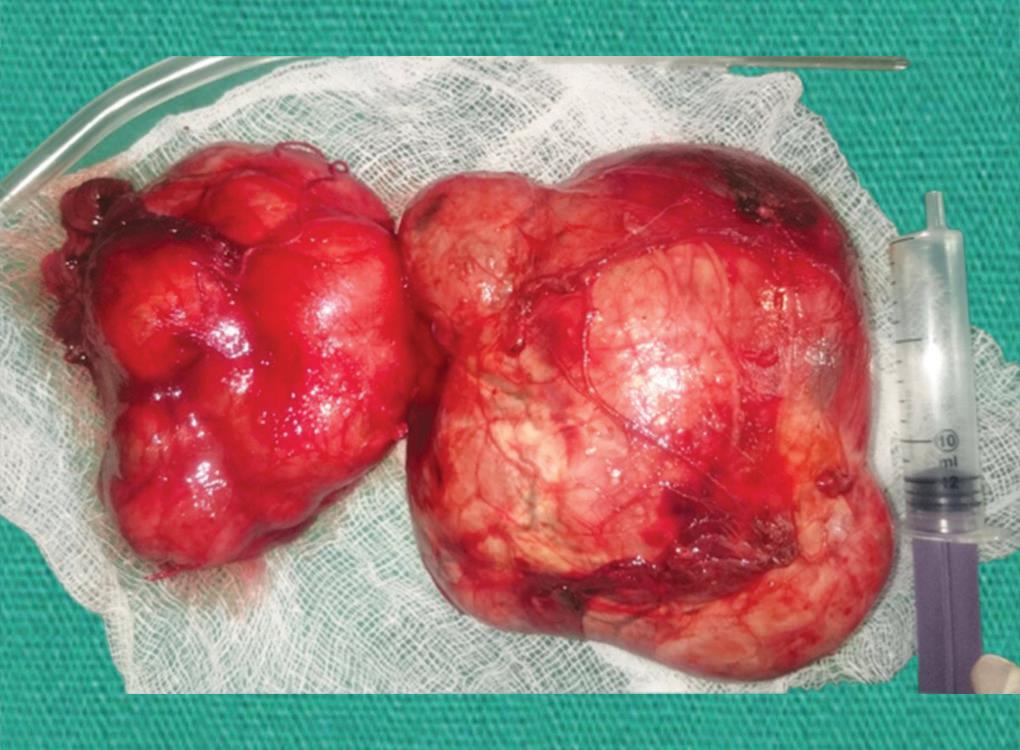 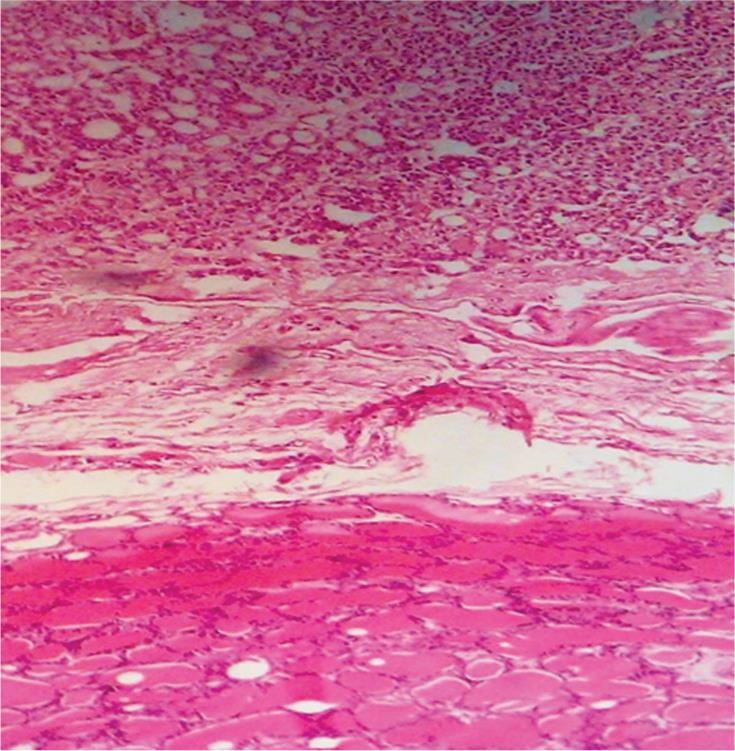 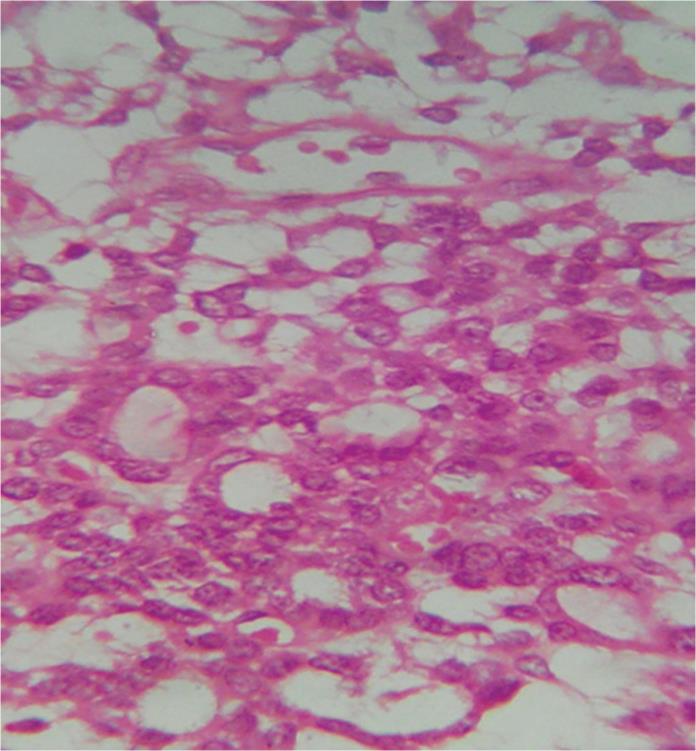 Thyroidectomy for massive goiters is challenging due to multiple risk factors like securing the airway, potential injury to recurrent laryngeal nerve, blood loss, parathyroid injury due to distorted anatomy.7 Difficult intubation is anticipated in these patients due to gross tracheal deviation, compression or tracheomalacia. Intubation is achieved using flexometallic endotracheal tubes or tubes of smaller size.10,11 Awake intubation with flexible bronchoscopes may be warranted if necessary.12,13 In our case, patient could not be intubated twice previously in two other hospitals due to respiratory distress. Hence in our institute, the anesthetists intubated the patient under guidance of flexible bronchoscopy in view of tracheal compression at D5 level.

Primary hyperparathyroidism is a rare disease with hyperparathyroid crisis being an unusual presentation.11,14 Increased levels of parathyroid hormones are seen more with malignant lesions. Intrathyroid parathyroid adenomas are extremely rare tumors.6 Preoperative localization and intraoperative guidance are needed to reduce operative failures. Preoperative SPECT in suspected cases gives accurate 3D information on ectopic adenomas. In our case report, the patient was asymptomatic with normal serum calcium levels prior to surgery. Hence parathormone levels were not measured prior to surgery.

This case report aims to emphasize the existence of congenital hypothyroidism and also that huge goiter when dissected meticulously may be removed without any major complications. We also report an incidental finding of rare intrathyroidal parathyroid adenoma.

Neonatal screening of hypothyroidism and its subsequent treatment can prevent mental retardation. We would also like to emphasize the importance of preoperative serum parathormone and calcium levels in all patients undergoing thyroidectomy to detect asymptomatic parathyroid adenomas.

All procedures performed in studies involving human participants were in accordance with the ethical standards of the institutional and/or national research committee and with the 1964 Helsinki declaration and its later amendments or comparable ethical standards.

This article does not contain any studies with animals performed by any of the authors.

Informed consent was obtained from all individual participants included in the study.