Kuttner’s tumor is called chronic sclerosing sialadenitis is a chronic inflammatory condition affecting the salivary glands. This is relatively rare in occurrence, and more important is that it is under-recognized and under-reported. A 71-year-old male patient came to our ENT outpatient department with complaints of swelling in the right submandibular region for 2 months, which was painless and insidious in onset growing slowly to attend the present size. The patient was hypertensive and nondiabetic. On local examination, there was a swelling of size 4 cm × 4 cm confined to the right submandibular triangle. The mass was firm in consistency, nontender with irregular surface, and not fixed to the skin or underlying structures. The mass was palpable bimanually. Skin over the swelling was normal. Clinically, the patient was diagnosed as “chronic submandibular adenitis” and sent for fine needle aspiration cytology (FNAC) and ultrasonogram (USG) of the neck. FNAC came as chronic adenitis of submandibular gland (right). USG neck came as submandibular adenitis (right). So the right submandibular gland was excised under general anesthesia and sent for the histopathological study. The microscopic study reported as Kuttner’s tumor (chronic sialadenitis with sialometaplasia). This is a rare benign condition of the submandibular gland simulating a tumor and is because of chronic inflammation. This case is presented here because of its rare occurrence.

Kuttner’s tumor is otherwise called chronic sclerosing sialadenitis, a benign inflammatory condition affecting the salivary gland. It mimics a malignant neoplasm clinically because of its presentation as a hard mass. This is an under-recognized entity in the surgical and pathological literature.

Kuttner’s tumor was first described by Kuttner, a German physician, more than a century ago, in 1896.1

It is characterized histologically by periductal fibrosis, dense lymphocytic infiltration with lymphoid follicle formation, loss of the acini, and, eventually, marked sclerosis of the salivary gland. We are presenting here a case of Kuttner’s tumor of the submandibular gland.

A 71-year-old male patient came to our ENT outpatient department with complaints of swelling in the right side of neck for 2 months. It was started with a small swelling which enlarged progressively to reach the present size. The swelling was painless and not associated with fever, cough, etc. The patient was hypertensive and nondiabetic. He was not addicted to alcohol, smoking, or tobacco consumption.

On examination, the patient was of average body built and had mild pallor.

On local examination, there was a swelling of size 4 cm × 4 cm confined to the right submandibular triangle. The mass was firm to hard in consistency and nontender. The surface was irregular and not fixed to the skin or underlying structures. The mass was mobile in all directions and palpable bimanually. The skin over the swelling was normal.

Clinically, the patient was diagnosed to be chronic submandibular adenitis and sent for fine needle aspiration cytology (FNAC) and ultrasonogram (USG) of the neck.

So we planned for excision of the right submandibular gland under general anesthesia. A 10 cm long incision was given about 1 inch below the lower border of the mandible in a skin crease. The incision was deepened and the platysma muscle was incised. The skin flap along with the platysma muscle was elevated superiorly and inferiorly. The tumor mass was identified. A horizontal incision was given over the mass at the level of the hyoid bone and the capsule was separated. Then the skin, platysma along with the gland capsule were elevated up to the lower border of the mandible to avoid injury to the mandibular branch of the facial nerve. The gland was mobilized by ligating the facial artery at two sites, that is, posterior to the gland and superiorly near the lower border of the mandible. Digastric muscle, hypoglossal nerve, and lingual nerve were identified and the gland along with the mass was removed by ligating and dividing the submandibular duct (Fig. 1). The wound was closed in layers.

The mass along with the gland was sent for the histopathological study. The postoperative period was uneventful. The patient was discharged on the 7th postoperative day after removal of sutures. 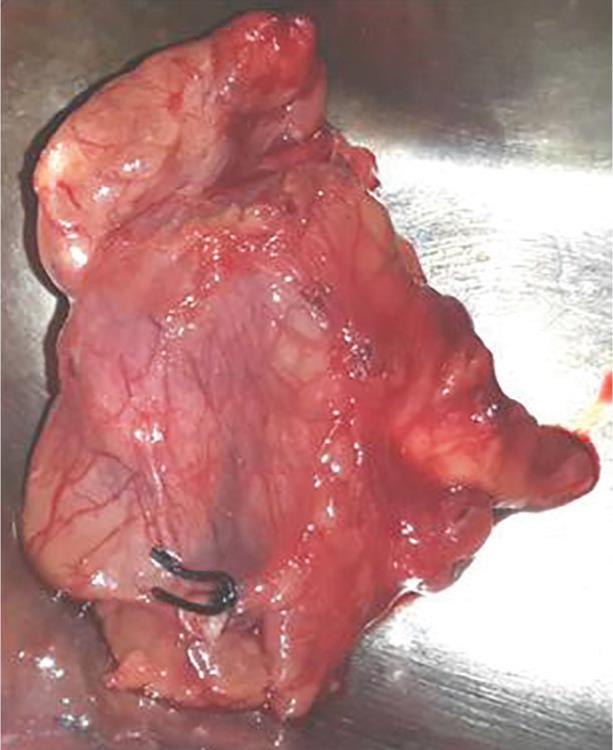 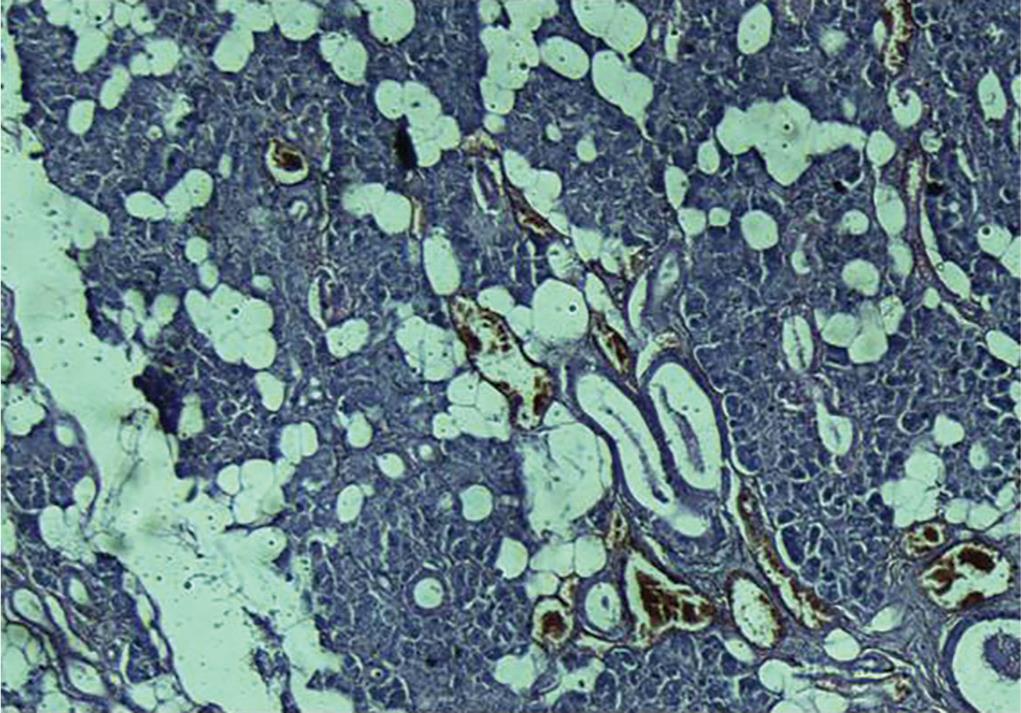 Fig. 2: Histopathological slide of the specimen

Kuttner’s tumor is a chronic inflammatory condition commonly found in the submandibular gland2 either unilaterally or bilaterally. But it is also found in other major and minor salivary glands.3

In general, salivary gland tumors are relatively rare (approximately 2.5–3 occurrences per 100,000 population per year) seen in the Western world. Salivary gland malignancy account for 3–5% of all head and neck cancers.4 Approximately 20–25% of parotid tumors, 35–40% of submandibular tumors and more than 90% of sublingual gland tumors are malignant. This underscores the clinical diagnosis of Kuttner’s tumor. Being a benign condition, the tumor mimics a malignant tumor of the salivary gland.

Kuttner’s tumor was first described by Kuttner more than a century ago1 in 1896. Chan described it as one of the most common diseases affecting the submandibular gland.5 Surprisingly, it is still under-recognized, and there are few publications on this entity in the English-language literature.

Kuttner’s tumor is a benign lesion of uncertain cause. Postulated mechanisms of the tumor include sialolithiasis (demonstrated in 29–83% of the affected glands), dysfunctional secretory function leading to ductal inspissations and autoimmune reaction.6,7 The presence of abundant immunoglobulin G4 (IgG4) associated with plasma cells infiltrating in to the salivary glands, as well as serum IgG4 concentration has been noted in patients with Kuttner’s tumor.

Kuttner’s tumor differs from nonspecific chronic sialadenitis by the almost exclusive localization in the submandibular gland. Clinically it is manifested as a hard mass and florid lymphoplasmacytic infiltrate accompanied by prominent and progressive fibrosis. This entity hence has been nicknamed as “cirrhosis” of the submandibular gland.8

The FNAC of Kuttner’s tumor is characterized by the following features: (a) relatively low cellularity, probably attributable to the fibrosis, making it difficult to aspirate the cellular elements; (b) scattered ductal structures with paucity or absence of acini; (c) ducts intimately surrounded by collagen sheaths or lymphoid cells; (d) small isolated fragments of fibrous stroma; and (e) moderate to large numbers of lymphoid cells that lack definite atypia.

In the recent times, preoperative USG along with FNAC makes an accurate diagnosis of Kuttner’s tumor. According to one estimate, about 44% patients undergoing submandibular gland resection are found to have this condition.9

In USG Kuttner’s tumor is characterized by a diffuse heterogeneous zone of echo shadows.10 Sonographic appearance resembles those of “cirrhotic liver.”11 Magnetic resonance imaging (MRI) has been tried to differentiate the benign condition from the malignant tumors. But the result was inconclusive.

Standard and most effective therapy to date is glandular sialadenectomy, which is associated with low operative morbidity. However, in recent times, administration of steroids, which shrinks the inflammatory lesion and is known to reduce the serum IgG4 level, has been found to be useful in younger patients or those who refuse surgery.

So Kuttner’s tumor is called chronic sclerosing sialadenitis which simulates malignant tumor especially when presented in elderly patients. We should be able to diagnose the condition by using preoperative USG, FNAC and postoperative histopathological study. Till now a large number of cases are under-reported and under-recognized.