Carcinoma ex-pleomorphic adenoma (CXPA) is an aggressive salivary gland malignant tumor. Diagnosis is difficult as the residual-mixed tumor is small and poorly understood due to the presence of various subtypes. Adenoma carcinoma and salivary duct carcinoma are two common subtypes. Prognostic factors are tumor size, grade, and clinical and pathological stages.

Carcinoma ex-pleomorphic adenoma (CXPA) is rare, very aggressive, and poorly understood malignancy that occurs in the salivary glands. In CXPA, an epithelial malignancy develops with a primary or recurrent benign pleomorphic adenoma. Metastasis from this tumor consists of carcinomatous elements alone. CXPA is a high-grade carcinoma with metastasis. In addition to CXPA, two other malignant-mixed tumors occur. One is a benign-mixed tumor that metastasizes as a benign tumor. The other is carcinosarcoma in which the primary tumor and a malignant mesenchymal tumor. CXPA accounts for 3.6% of all salivary neoplasm. High-grade sarcoma ex-pleomorphic adenoma is the latest entity. Long-standing tumors are malignant change prone. Malignant changes can occur due to genetic instabilities.

The CXPA presents as an asymptomatic mass, occasionally with pain and dysphagia due to the presence of a mass in the paraphargngeal space. The mean size of the tumor ranges from 1 cm to 17 cm.

A 47-year-old female (Fig. 1) presented with swelling in the oral cavity and was earlier treated with homeopathy for 2 months. On examination, the tonsil was found to be pushed medially into the oropharynx. Clinically apart from this, there were no other findings and neck examination revealed no lymph nodes. The patient was subjected to fine needle aspiration cytology (FNAC) of the mass. 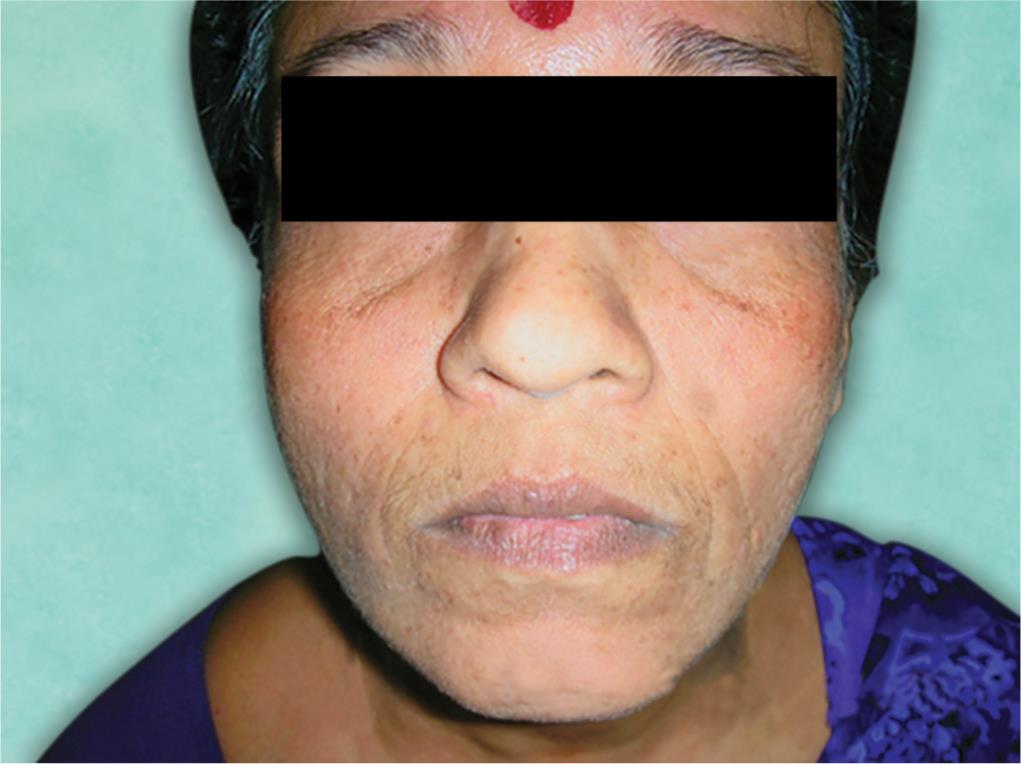 Fig. 1: Frontal profile of the patient

The spiral computed tomography (CT) scan of the neck was done with and without contrast revealing a large well-marginated mass in the right paraorophargeal space (Figs 2 and 3). The mass showed mild heterogeneous enhancement with small necrotic areas. The mass was displaced to the right lateral oropharyngeal wall and tonsillar fossa medially with mild narrowing of the airway (Fig. 4). Pterygoid muscles were compressed. No obvious continuation of mass is seen close to the deep lobe of the right parotid gland. The mass measured about 3.75 × 3.4 cm. The impression was a large mass in the right paraorophagngeal space that could be accessory salivary gland adenoma. 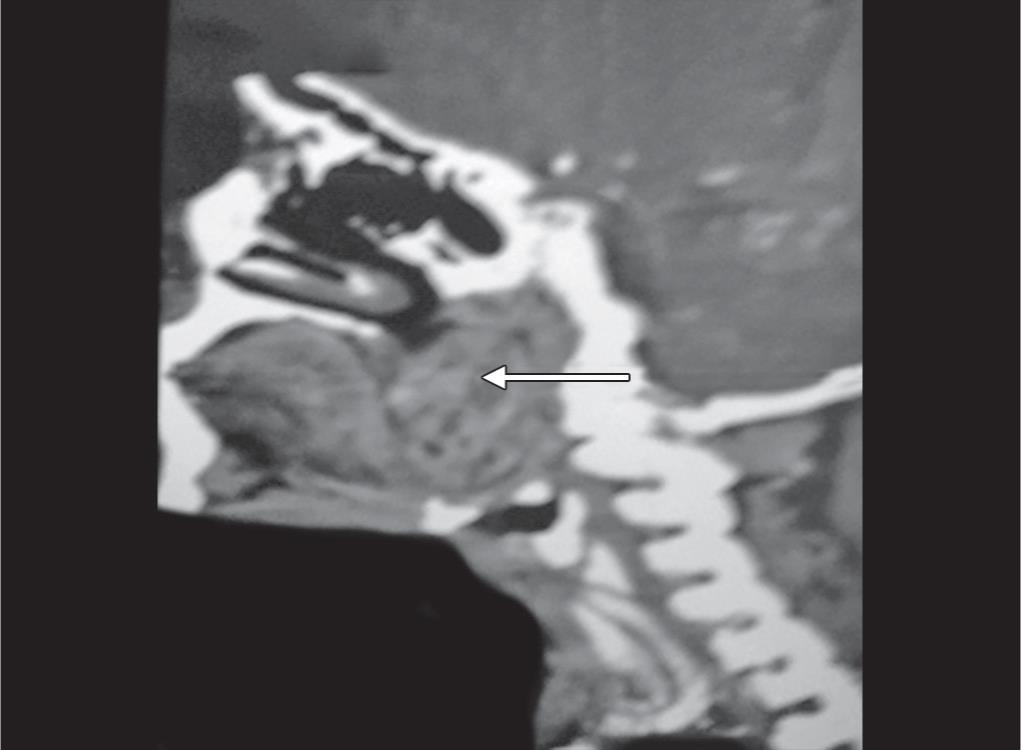 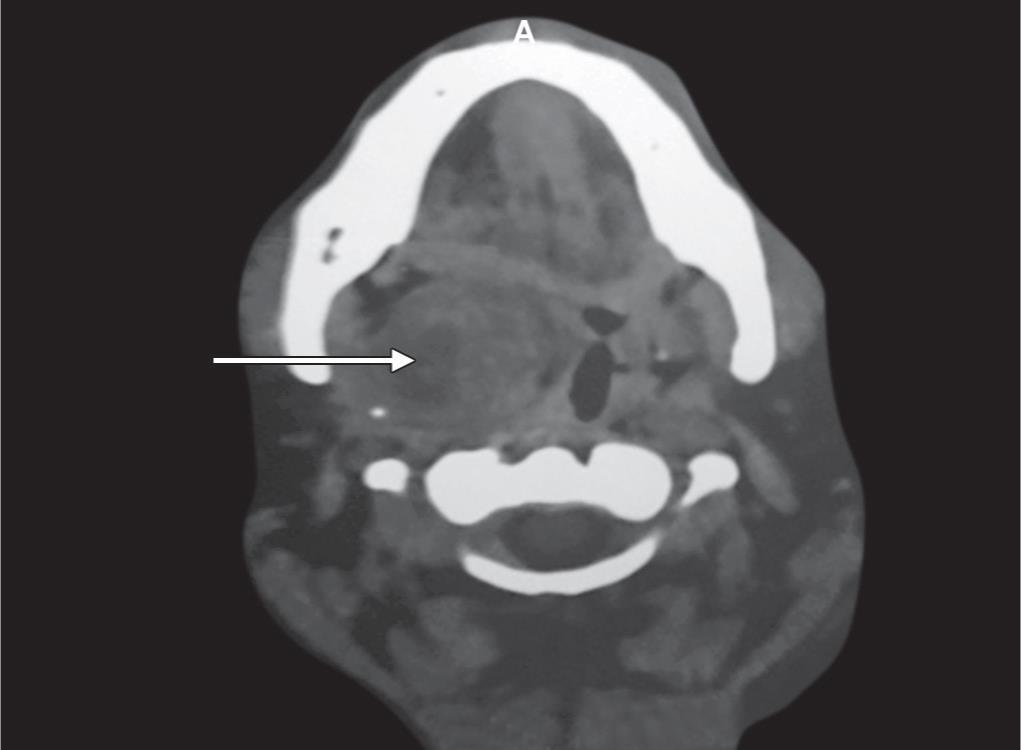 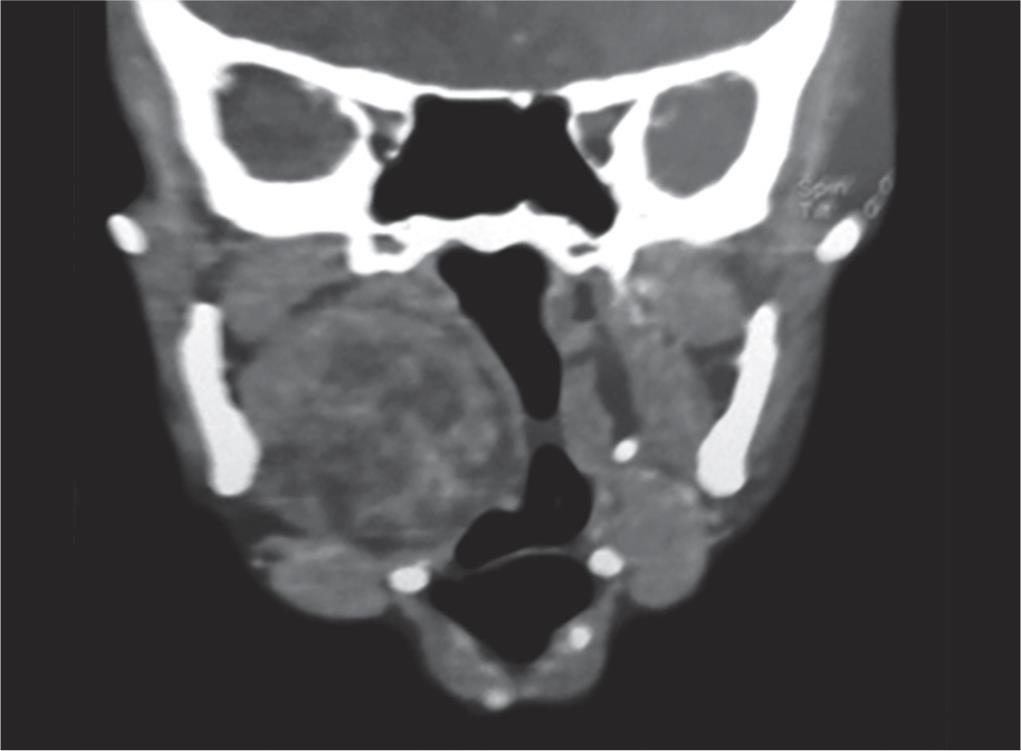 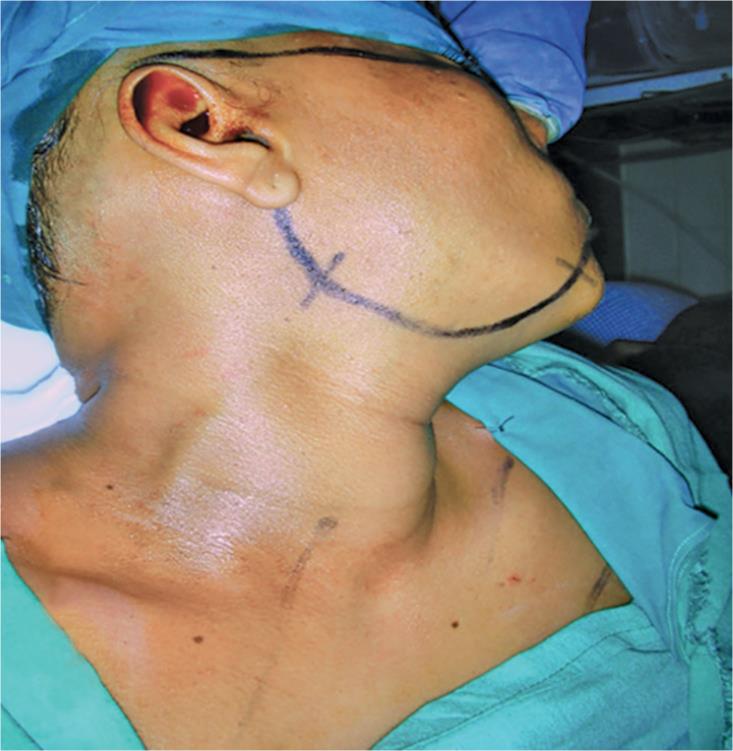 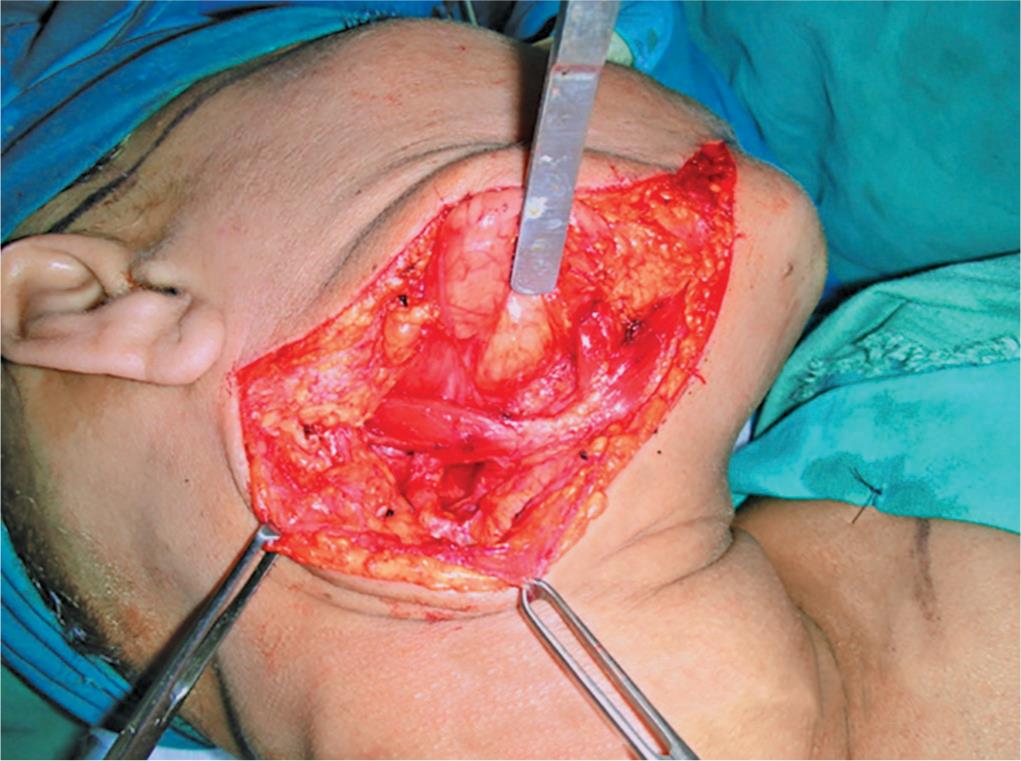 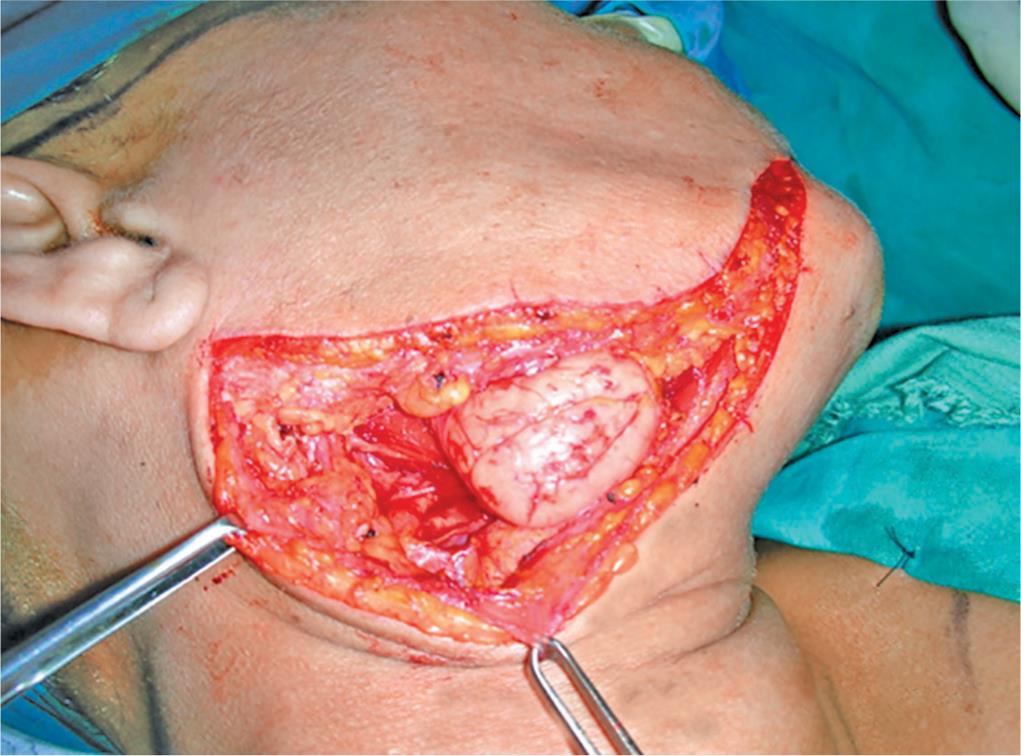 Initially, it was reported as pleomorphic adenoma with mucoepidermoid carcinoma of the salivary gland supported by the following features: well-encapsulated tumor mass, proliferative epithelial cells, squamoid in nature, and arranged in nests surrounded by mucoid and myxoid areas, with cystic changes at places showing oncocytic change and chronic inflammatory infiltrate. The capsule is infiltrated by squamoid tumor cells but not beyond the capsule. 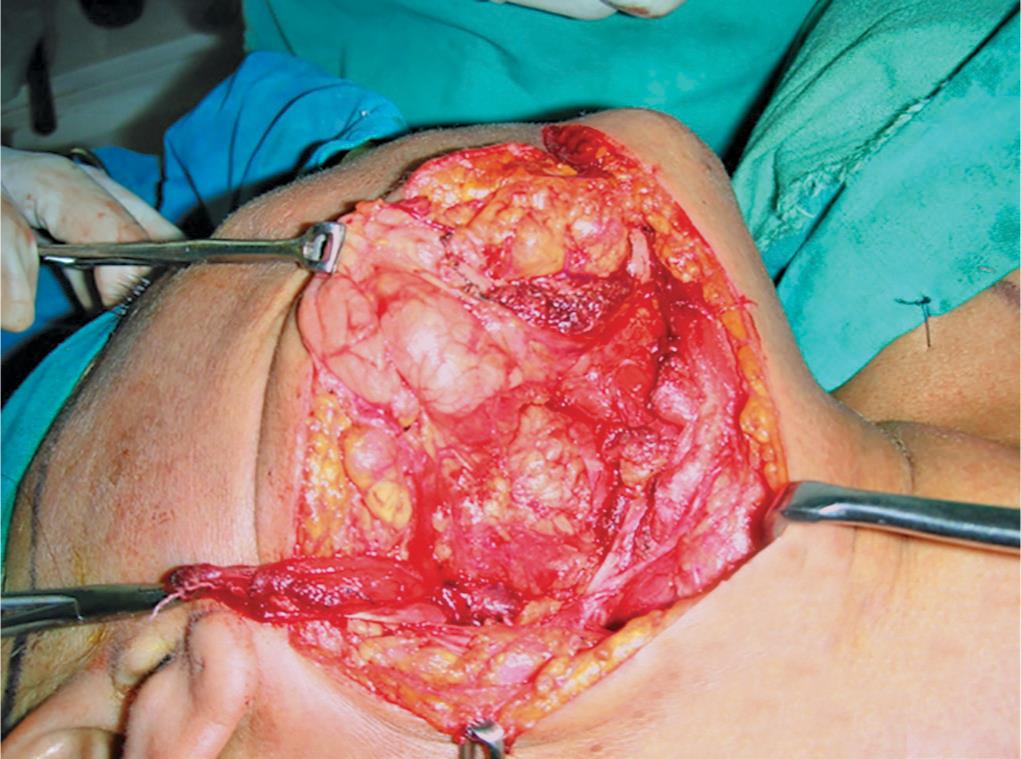 Fig. 8: Tumor in the parapharyngeal space 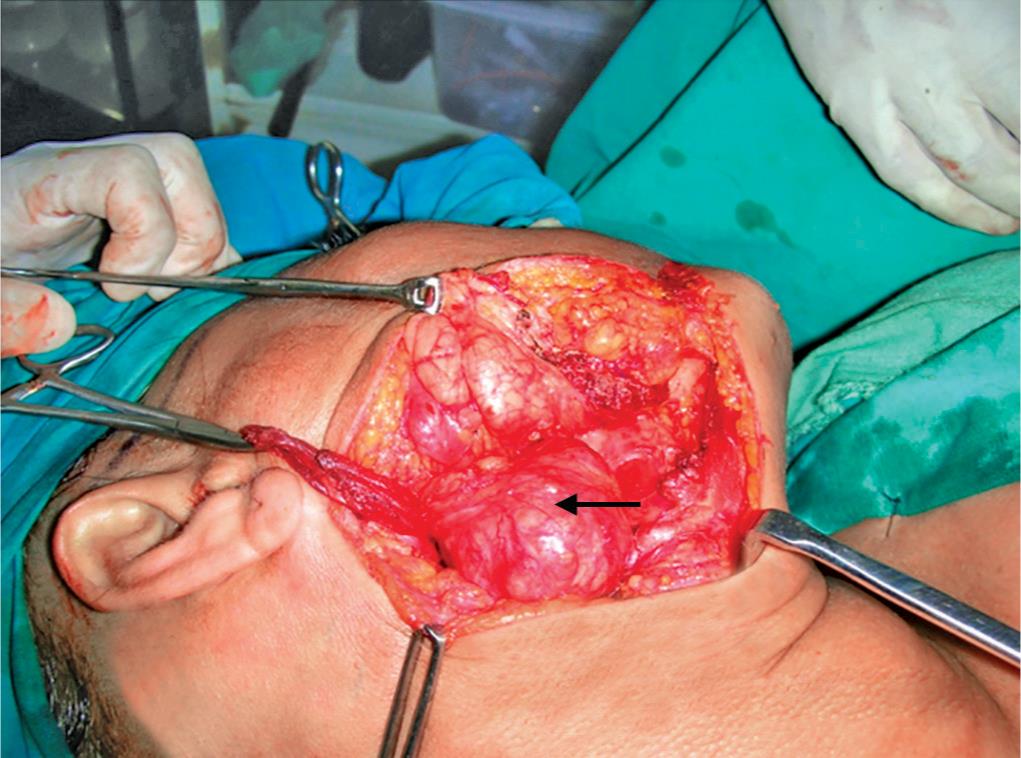 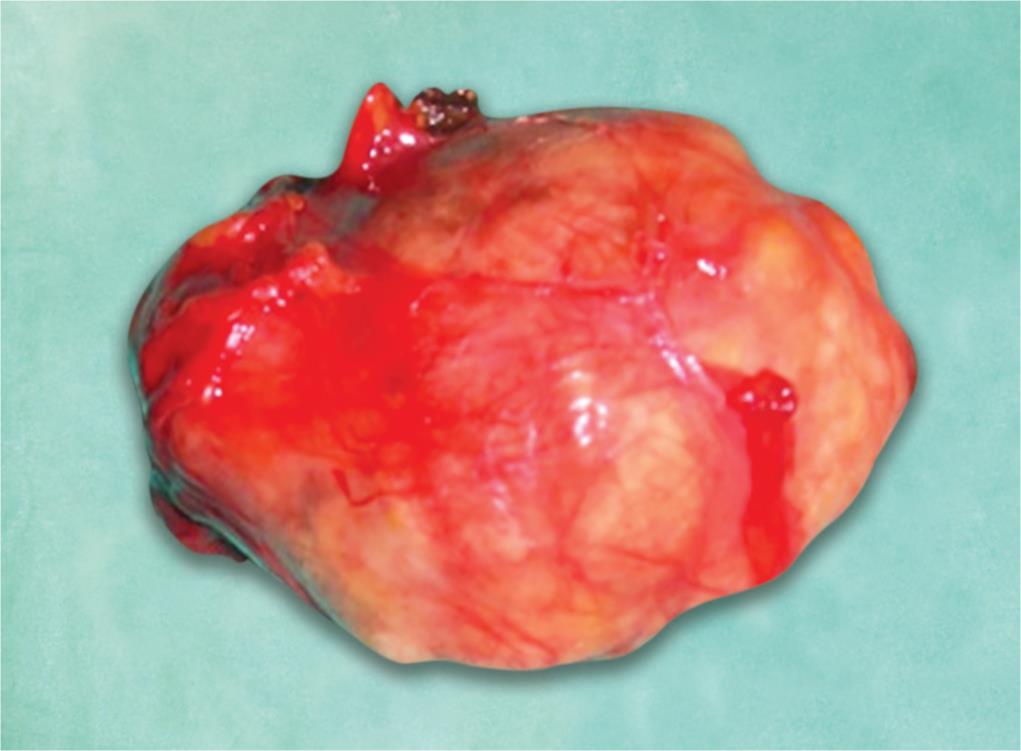 Another histological review was taken which showed an evidence of neoplastic cells comprising epithelial and myoepithelial cells. Cells were arranged in the form of ducts, acini, irregular, tubules, sheets, and nests. There were cystic structures lined by neoplastic cells. There are small to large cysts and disciform patterns lined by squamoid and mucous secreting cells. These areas show features of mucoepidermoid carcinoma: the stroma is abundant, loose with pseudocartilage and myxoid areas. Focal chronic inflammatory cell infiltrate was noted in the stroma. Hence, a diagnosis of CXPA—minor salivary gland—was made.

After this operation, the patient’s wound healed well and the patient was subjected to radiotherapy with a dose of 55 g/27 cycles at the Department of Radio-oncology, for which she had a minimal skin reaction. Ap/Bl with computerized c7 planning. The post follow-up showed no residual, recurrent 8.5 years postop. No e/o recurrent tumor and disease.

The CXPA is an aggressive malignancy. Regional metastasis and mortality are high. It was difficult to diagnose as the mixed tumor component is small and, overlooked, malignant component may be difficult to classify. Pathogenesis is controversial. One school believed that the tumor was malignant from the onset.1 Another group proved carcinomatous transformation of a benign-mixed tumor.2 Up to a 100 cut may be required to find a small mixed tumor in a salivary gland carcinoma.3 A residual-mixed tumor component should be looked for.4 It has been reported that if the carcinomatous components are combined within the benign-mixed tumor capsule, the prognosis is excellent.5 Perineural invasion, lymph node metastasis, and positive margins were all poor prognostic factors.6 Timely removal of all masses should eliminate almost half of all the CXPA tumors; optimal diagnosis and treatment can be achieved only by close communication between the surgeon and the pathologist, and adequate surgery by an experienced oncologist. The role of chemotherapy is determined based on the histological assistance from a radiation oncologist.

Tumors that invade beyond the capsule into the surrounding tissue by less than 1.5 cm are known as minimally invasive. These patients have an excellent prognosis. The tumor going beyond 1.5 cm is known as invasive. In such patients, the prognosis varies in accordance with the tumor shape and the grade. The grade of cells seen in cancerous epithelial components varies from well differentiated to poorly differentiate to anaplastic depending on the type of cancer. Most carcinomas are high grade, but some are low grade. A mucoepidermoid CXPA is histologically categorized as being of low, intermediate, or high grade histologically. Perineural invasion and angiovascular invasion are commonly encountered in invasive types. Necrosis is prominent in high-grade types. Metastasis may occur in the lymph nodes, the bone, and the brain (vertebral bodies specially).

Tumor markers are described for pleomorphic adenoma. Specific additional markers for CXPA—immunoreactivity for p53—are used to differentiate pleomorphic adenoma and CXPA.7–10 Her2 (c-ab b-2) has been used, along with cyclin A.10–13 X-linked inhibition of apoptosis protein (XIAP) is also associated with aggressive behavior of CXPA.14

Rearrangement of chromosome 8q/12 and alternation in chromosome 12q13–15 with amplification of AMGIC, HMGA2, and mpm3 may contribute to malignant transformation.15 p53 alternations and over expressions are seen in the development of CXPA.10

The CXPA is a tumor, which when detected early and when we have a high suspicion of malignancy, can be totally recurrence free if properly managed with multimodality form of treatment—a case for cure.