Foreign Bodies in Esophagus: An Experience with Rigid Esophagoscope in ENT Practice

Background: Foreign body (FB) ingestion and impaction in the esophagus constitute an important cause of morbidity and mortality worldwide. One-third of foreign bodies retained in the gastrointestinal tract are present in the esophagus and mostly in children require endoscopic removal with rigid esophagoscopy.

Aims and objectives: This study seeks to highlight the challenges in the management of esophageal FB using rigid esophagoscopy. It will also evaluate the outcome of management. Their management depends on the anatomic location, shape, size of the foreign body, and duration of impaction.

Materials and methods: This was a retrospective study of 60 patients with confirmed esophageal foreign bodies that were managed in the ENT department of SCL Hospital, NHL Medical College, Ahmedabad, from January 2016 to June 2018. Demographic and clinical data were documented, and simple statistical tables were used to illustrate the data.

Conclusion: The management of impacted esophageal foreign bodies with rigid esophagoscopy was safe, reliable, and an effective procedure despite its challenges.

The sword swallowers in Greece were the first group of people in 300 BC whose act led to the further development of esophagoscope.1 Esophagoscopy makes up an indispensable part of the practice of both otolaryngologist and cardiothoracic surgeons. Today’s “rigid esophagoscopy” was designed by Chevalier Jackson who broke new grounds in aerodigestive foreign body management.2

Foreign body ingestion is a well-known occurrence worldwide in children, especially in their sixth year of life with a peak in children older than 3 years.3–6 It usually presents as an emergency. Most ingested foreign bodies become impacted often in the esophagus. Occasionally, foreign body may pass through the esophagus into the stomach without any hitch to the patients.7 Various reasons for this event can be pointed out, stressing that all the characteristics such as sex, age, socioeconomical status, and parents’ influences are closely interrelated.8 Impacted esophageal foreign bodies are typically found at one of the following three anatomic esophageal narrowings: the level of the cricopharyngeus muscle, the level of the aortic arch, and the lower esophageal sphincter.7,9 Management of foreign body depends on a number of factors, such as anatomic location, shape, and size of the foreign body; duration of impaction; and the surgeon’s expertise and availability of appropriate instruments. Rigid esophagoscopy for the removal of foreign body remain the best mode of treatment. There are other modes of treatments reported in the literature; the use of flexible esophagoscopy, cervical esophagotomy, and the use of Foley’s catheter under fluoroscopic guidance.10,11

Complications such as esophageal perforations may arise, especially when the instruments for rigid esophagoscopy are inappropriate and the surgeons are inexperience.12,13 Besides, sharp objects at any point of impaction may cause perforation before extraction. They can easily result in mediastinitis and mortality.14 Esophageal perforation can be avoided when foreign bodies are pulled into the scope before extraction.15

Esophagoscopy for diagnosis is indicated in nearly all patients with unexplained symptoms and signs of esophageal conditions. In the most of the cases, a typical history of swallowing a foreign body was available, with no symptoms at all to an occasional vomiting. The most common aspects presented in the literature as leading factors to those injuries include children’s behavior, anatomical characteristics, and physiological features such as immature swallowing coordination, development of chewing capacity, and higher respiratory rates.19 Details of FB characteristics and the dynamics of the traumatic events involved in FB swallowing are therefore important to understand the pathogenic pathways. Fortunately, most foreign bodies that reach the gastrointestinal tract pass spontaneously. Only 10–20% will require endoscopic removal, although mortality from foreign bodies ingestion is extremely low.

The aim of the present article is to highlight the challenges posed by rigid esophagoscopy in the management of impacted esophageal foreign bodies. It will also evaluate the outcome of management.

This is a 2 year retrospective study of 60 patients with impacted esophageal foreign bodies that were managed in the ENT departments of SCL Hospital, NHL Medical College, Ahmedabad from January 2016 to June 2018.

The records of all patients who presented to the hospital with history of FB ingestion were retrieved from indoor registers, theater records, and case files. The data analyzed were age, sex, clinical presentations, and impacted foreign bodies in the esophagus, type of foreign bodies, dimension and consistency of foreign bodies, foreign body location in esophagus, investigations, treatments, and complications of managements encountered by specialists. Simple statistical tables were used to illustrate the data. Categorical data were expressed as mean and standard deviation. 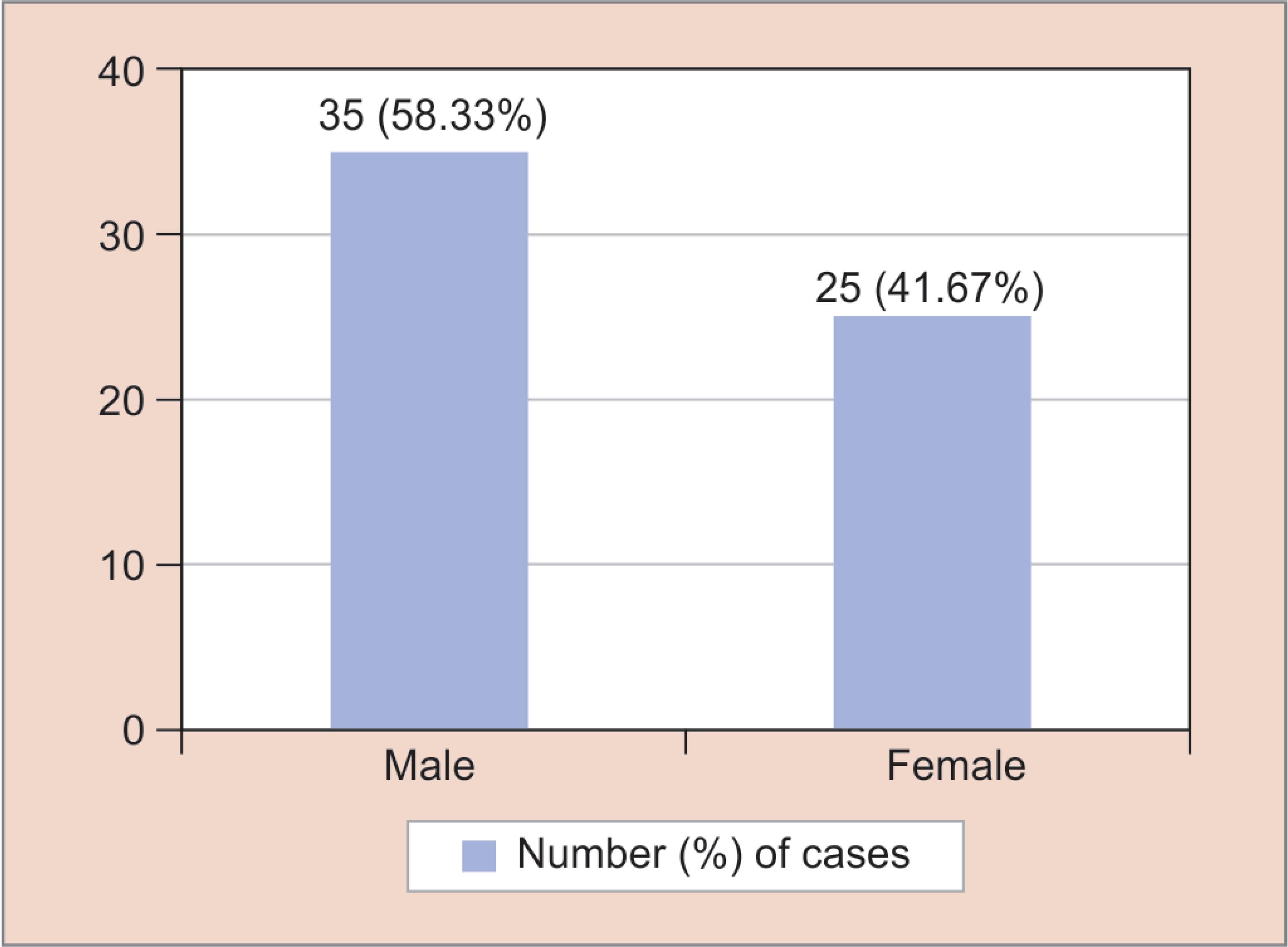 All the patients presented as an emergency, with most of them having feeling of lump in the throat, dysphagia, odynophagia, and neck pain. Only a few presented with difficulty in breathing. Six (10%) patients presented to the hospital after 72 hours (Table 4). All the patients had soft tissue radiograph of the neck (anteroposterior and lateral views) and chest. The plain soft tissue radiograph of the neck clearly showed some foreign bodies that were impacted in the esophagus. Besides, it showed air entrapment and increased prevertebral soft tissue shadows in some of the patients with impacted dentures. Rigid esophagoscopy was performed on all of the patients under endotracheal intubation with adequate muscle relaxation. All 60 (100%) patients had extraction of foreign bodies with the aid of foreign body grasping forceps. Not a single case was recorded as failed extraction due to foreign body dislodged into the stomach. Plain abdominal radiograph were further done for the patients after rigid esophagoscopy after next day morning to rule out any esophageal complications. Complications occurred in 5 (8.33%) cases. They include mucosal lacerations and primary hemorrhage in 5 cases.

All confirmed esophageal mucosal injuries were successfully managed conservatively with nasogastric tube feeding and parenteral broad-spectrum antibiotics, such as intravenous ceftriaxone and metronidazole for the first 24 hours. Besides, the patients had postoperative check radiographs of the chest to look out for features of mediastinitis before oral feeding, antibiotics, and analgesics. For the patient with esophageal perforation, the nasogastric feeding tube was left in situ for a period of 5–10 days postoperatively as a rule to allow for wound healing and prevention of further complications. No mortality was recorded.

Foreign body impaction in the upper digestive tract continues to be a common health problem in pediatric patients. This study revealed that foreign body impaction was more common in the 1–years age-group, showing similarities with the result of the ESFBIs study and with Lin’s study and also with Okoye and Erefah study and found more foreign bodies impaction in the 0–5 age-group.16,20 These studies have demonstrated that children are more prone to foreign body ingestion. Less often, older children have risky behaviors, and this decrease in risk is as well ensured by the augmented size of the esophagus.

In scientific study, the most frequent foreign bodies are fish bones, metal objects such as batteries and coins, and broken tooth fragments.21,22 Tissue response to a foreign body varies according to the composition of the FB and to any associated bacterial overinfection. Organic fragments cause a greater acute inflammation in comparison to piece of metal, plastic, or bone. From this study, coins, button batteries, toy parts, and ornaments were relatively common findings among children, whereas dentures, fish bones, and mutton bones were common findings among the adult populations.20,23,24 These findings were same as reported by Okoye and Erefah.16 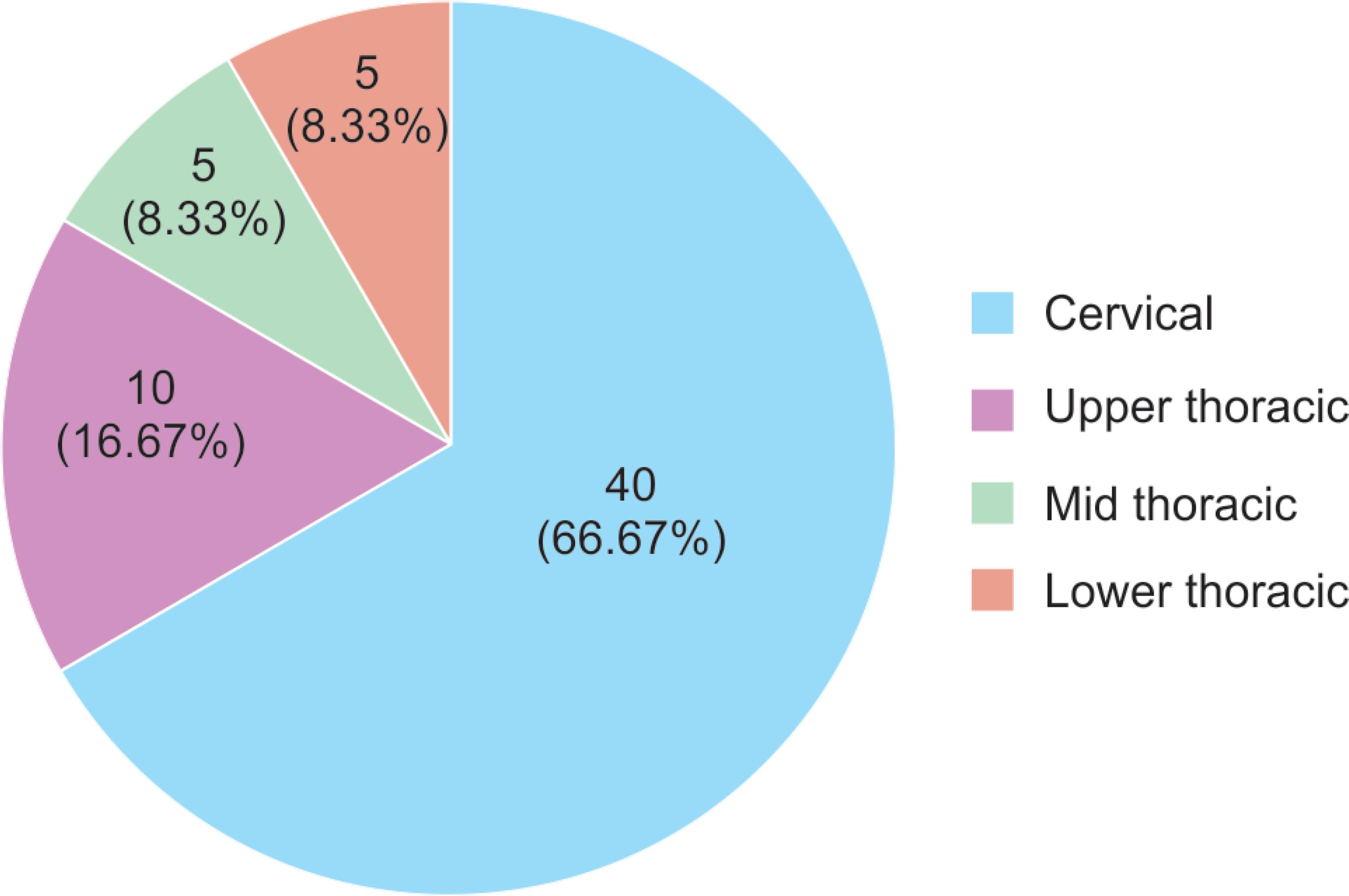 Objects’ characteristics such as shape, dimension, and consistency are important in order to determine the damage that might occur. Rimell and Stool performed a retrospective study in which they examined the characteristics of objects that had caused serious aerodigestive tract injuries, with the definition of serious being indicated by the need of operative removal or the occurrence of death due to choking, as reported from the Consumer Product Safety Commission (CPSC).25 The risk of injury or death posed by food, toy or toy parts, or another object depends upon its size, shape, and consistency.26,27

The radiographic diagnosis of foreign body impaction in the esophagus was found to be very useful in our study. It cannot be relied upon solely because some foreign bodies like tiny fish bones, plastic toys, and dentures may not be visible. Radiolucent materials that are lodged in the esophagus in some cases may pose diagnostic challenge and give false-negative results.28

The majority of swallowed foreign bodies pass harmlessly and spontaneously through the gastrointestinal tract (GIT), but in case of lodgment or toxicity of the object, the FBs must be rapidly identified and removed.20 The most frequent lodgment site described in studies is the cricopharyngeus muscle, while in our study the cricopharyngeal sphincter of the esophagus was most frequent.29,30 Jos Adoga et al. found majority of their patient’s foreign bodies impacted in the middle third of the esophagus. Although most objects pass easily through the intestine, entrapment can occur at the pylorus at the ligament of Treitz and at the ileocecal valve.31

We observed that very less patient presented to the hospital after 72 hours of incidence but in other study observed that most of patients presented to the hospital after 72 hours of incidence due to ignorance and poverty.32–34 Most of the patients in hospital do not consider surgery first as a form of treatment. They will only consider surgery after the various means of treatment they have tried fail. Late presentation affected the prognosis of impacted foreign bodies in the esophagus. Perforating objects are potentially life-threatening because they may provoke the formation of a fistula between the esophagus and the innominate artery, thus ensuring catastrophic bleeding.35,36 Other complications associated with retained esophageal foreign bodies are tracheal compression, erosion through the mucosa, and FB migration into adjacent structures, such as the respiratory tract or the aorta.

At present, the rigid esophagoscopy remains the universally preferred method of extracting foreign bodies from the esophagus with a success rate between 94% and 100%.37 Incidence of esophageal perforation with rigid esophagoscopy was 0.34% with a mortality rate of 0.05%.38 In our study, incidence of complication was 8.33% due to sharp nature of some of the foreign bodies, long duration of impaction, late presentation to the hospitals, and lack of appropriate facilities. All esophageal mucosal injuries and lacerations were successfully managed conservatively with nasogastric tube feeding; parenteral vital signs were monitored closely, as we looked out for clinical features of mediastinitis. They were counseled and follow-up in outpatients clinic for several weeks.11

Prompt endoscopic intervention is the gold standard for all complicated or high-risk situations, with particular relevance to sharp and pointed foreign bodies, such as dentures with protruding hooks, shaving blades, and open safety pins, which increase the danger of perforation. In our hospital, we did not have functional flexible esophagoscopy, so we were left with only the option of using the rigid esophagoscope. In our study, five complications were observed; therefore, removal techniques other than endoscopy were preferred. In planning the extraction, one of the important points to consider is the proper choice of the instruments. In our study, the greatest part of the extraction was performed through negus esophagoscope with esophageal forceps in general anesthesia, and it showed a very low percentage of complications.

The management of impacted esophageal foreign bodies with rigid esophagoscopy is an effective and safe procedure despite its challenges. The inadequacy of adult supervision has been largely reported and shows the importance of the implementation of education campaigns meant to properly estimate the overall risks and decrease FB ingestion. So, doctor’s role is fundamental in educating adult dealing with children, not only from a preventive point of view but also in diminishing the impact that this kind of injuries has on public health.