A 26-year-old man presented with a large, painless, mobile, pedunculated, fluctuant, and nontransilluminant swelling hanging in front of the left ear. He had undergone superficial parotidectomy 9 months ago elsewhere for chronic nonspecific sialadenitis of left parotid gland. The fine needle aspiration was nondiagnostic and revealed turbid dark yellow color fluid. A total parotidectomy was performed to remove the lesion completely as the tumor was involving the deep lobe. Histopathology was consistent with features of low-grade mucoepidermoid carcinoma. Immediate postoperatively the patient had a House and Brackman grade III left facial nerve paresis, which later improved to grade II. This unusual presentation of malignant transformation of chronic nonspecific sialadenitis is one of the rare unique reported cases to our knowledge.

Clinical examination of such lesions should be coupled with investigations such as MRI as well as histopathological correlation by fine needle aspiration cytology (FNAC). Depending on the histopathology of the tumor, the treatment of choice may extend from superficial parotidectomy to total parotidectomy with or without adjuvant therapy.2 Therefore, long-term follow-up of such patients with nonspecific sialadenitis is warranted and any suspicion of malignant transformation should prompt the treating surgeon for a detailed workup.

A 26-year-old gentleman had been diagnosed with chronic nonspecific sialadenitis of the left parotid gland for which he underwent a superficial parotidectomy in 2009 elsewhere. He was asymptomatic for 9 months after surgery. He then noticed a small swelling behind the left ear lobule, which was initially the size of a peanut, then gradually increased in size and attained the present size. He gives no history of pain, difficulty in swallowing, or difficulty in breathing. He has no other comorbidities.

He underwent a conservative total parotidectomy. A large tumor with pedunculated component (10 × 10 cm) with infiltration into the deep lobe of the left parotid gland was found (Fig. 5). There was extensive scar tissue with no planes between the tumor, surrounding soft tissue, masseter muscle, and the left external ear canal. The tumor was abutting the upper division of the facial nerve. Main trunk and upper division of the facial nerve were identified and preserved. He had an uneventful postoperative period and was shifted to the ward. Postoperatively, he was found to have developed a grade III left-sided House and Brackman facial nerve paresis. He was given appropriate facial physiotherapy and eye protective measures.

The histopathology was consistent with features of low-grade mucoepidermoid carcinoma with no perineural invasion.

He was given adjuvant radiotherapy (66 Gy in 33 fractions) and he tolerated the radiotherapy well. There was no evidence of recurrence or residual of disease at 2-year postoperative status. His facial palsy has downgraded from grade III to grade II presently. This seems to be a rare case report, suggesting malignant transformation of biopsy-proven nonspecific sialadenitis in parotid gland. 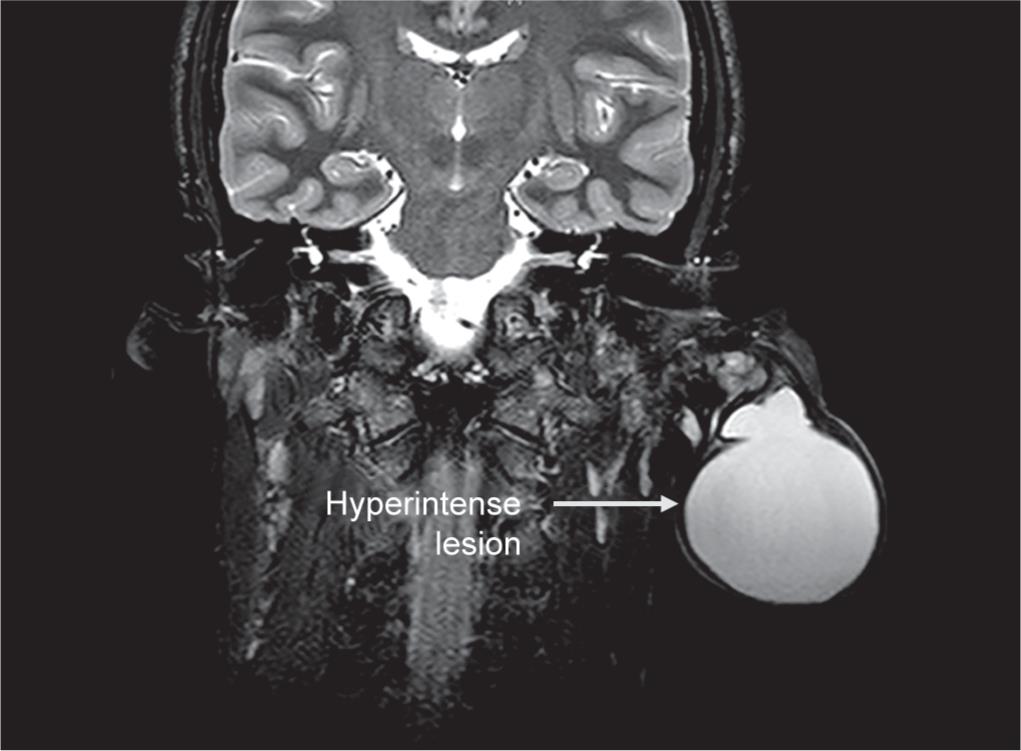 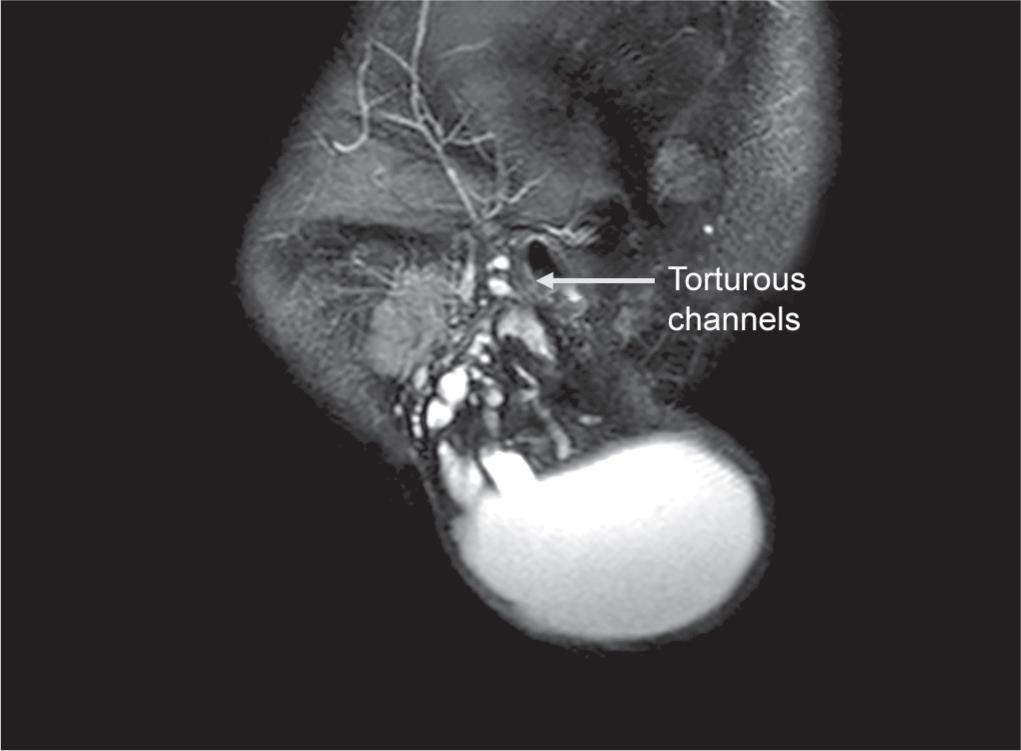 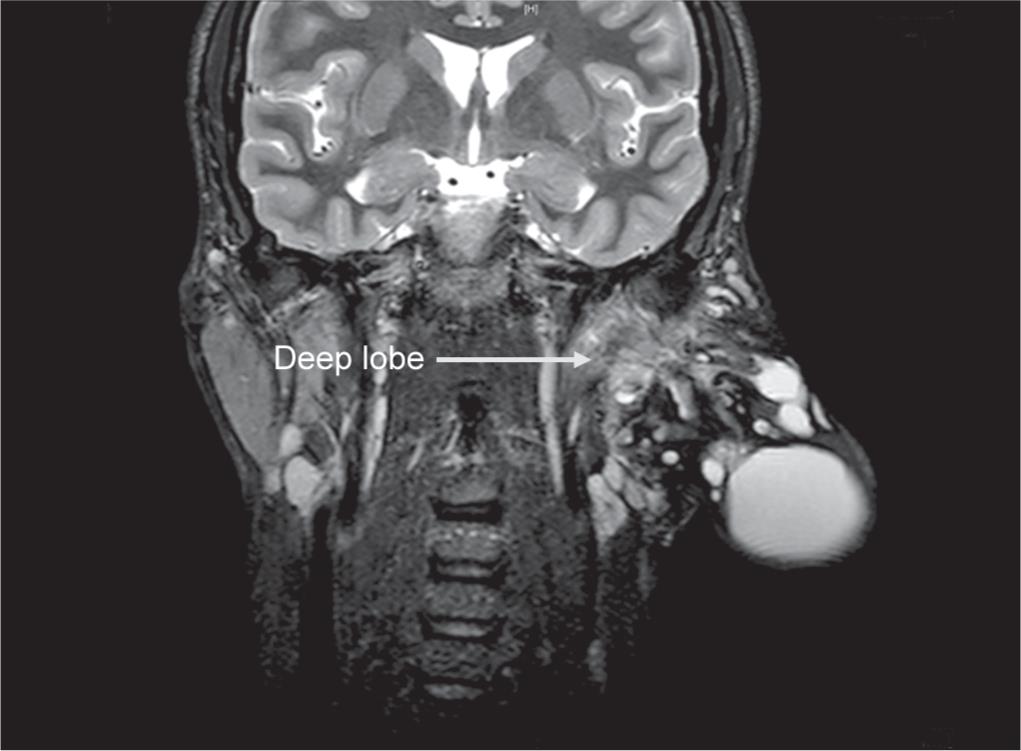 Fig. 4: Extension up to the deep lobe of parotid 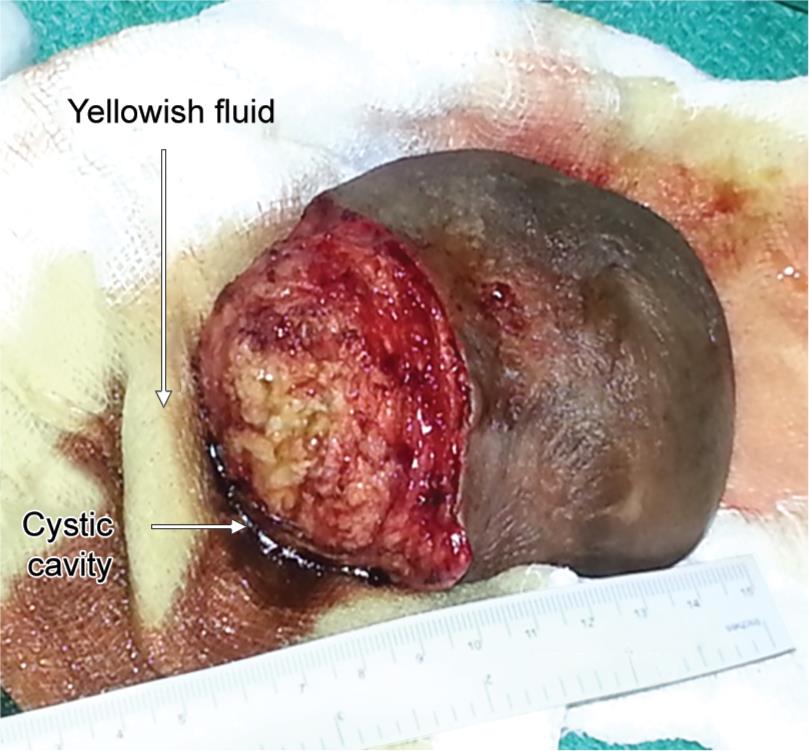 Chronic nonspecific parotid sialadenitis is known to cause intermittent bouts of parotid pain and swelling, reduced salivary flow, mucopurulent secretion, and is an inflammatory condition.

The etiopathogenesis could be attributed to reduced salivary secretion leading to accent of bacterial flora along the ductal system leading to infection. This ultimately causes destruction and fibrosis of the acinar elements and duct ectasia. Mostly cases are idiopathic; however, in some cases it may be due to obstruction of the ducts. Obstruction may be secondarily due to stones, duct strictures, or external pressure on the main duct.3

The other theory proposed suggests that repeated episodes of acute infection may lead to mucus metaplasia of ductal epithelium resulting in increased mucus content of secretions, stasis, and further episodes of inflammation.4

Majority of these are successfully managed with conservative therapy, which includes antibiotics, analgesia, mouthwashes, sialogogues, and gland massage. Recurrent episodes lead to parenchymal fibrosis and irreversible ductal damage leading to a fibro-inflammatory mass; such resistant cases are managed surgically (both superficial and near-total parotidectomy have been advocated).6,7

Superficial parotidectomy is esthetically more acceptable as compared to radical surgery and there is evidence that it also allows preservation of residual function.8

Malignant transformation of this entity has been very rarely described.

Stewart et al. in 1945 first described a separate salivary neoplasm recognized as mucoepidermoid carcinoma.9 Pluripotent reserve cells of the excretory ducts of salivary gland, which have the potential to differentiate into squamous, columnar, and mucous cells, are believed to be responsible for it.10

Although no specific etiologic factors have been identified, exposure to ionizing radiation has been reported in some cases. Mucoepidermoid carcinoma accounts for 5% of all salivary gland tumors. It most commonly involves the parotid gland and is the most common malignant tumor to arise in children and adolescents under 20 years of age. It initially presents as a painless mass 2–3 cm in diameter. Consistency may vary from firm to hard, and very rarely cystic in nature.11

Radiotherapy should be used in cases where the deep lobe is involved or where adequate surgical margins are not tumor free; however, these cases need to be periodically followed up.14

Mucoepidermoid carcinoma of the parotid is a rare salivary gland tumor. Clinical stage and histological grade are the main prognostic factors. Its presentation as a cystic mass is very rare. As a conclusion, malignant transformation of nonspecific sialadenitis of the parotid gland has not been reported earlier to the best of our knowledge.