Cervical Transverse Mega-apophysis: A Rare Cause of Plexopathy

Aim: This article aims to describe the case of a 43-year-old male with a neurogenic thoracic outlet syndrome caused by a C7 transverse mega-apophysis.

Background: Cervical transverse mega-apophysis, transverse apophysomegaly, or elongation of the transverse vertebral process represents a variation of normal skeletal anatomy. This variation has been little studied and its prevalence in the population is unknown because it often exists without symptoms. It is estimated that less than 10% of cases are symptomatic.

Case description: We present a rare case of a man with a neurogenic thoracic outlet syndrome (in this case, a left plexopathy) caused by a cervical transverse mega-apophysis. After surgical intervention, the patient improved and after a 1-year follow-up, he remained asymptomatic.

Conclusion: Even though some authors describe cervical pain associated with this condition, we found very few data regarding plexopathy or other neurological symptoms caused by a cervical transverse apophysomegaly.

Cervical transvers mega-apophysis represents a variation of normal skeletal anatomy. This variation had been little studied and its prevalence in the population is unknown because it often exists without symptoms. We present a rare case of a man with a neurogenic thoracic outlet syndrome with left plexopathy caused by a cervical transverse mega-apophysis compression.

A 43-year-old man was referred with limitation in the extension of the first finger of the left hand for 2 years. Afterward, he presented progressive deterioration until developing paresis in flexion of the fingers, in addition to atrophy of the intrinsic musculature of the hand. The patient refers he has paresthesias in the inner part of the arm corresponding to the C8 and T1 dermatomes. The patient does not present cervical pain. The pulses in the left arm were normal. There was no clinical evidence of compression of the subclavian artery. With Adson’s test, the patient refers a little increasement of paresthesias in the inner part of the arm, but the strength of the radial pulse remained similar.

Images show a left C7 transverse mega-apophysis involving the inferior trunk of the brachial plexus at the level of the first costal arch (Figs 1 and 2). There is no existence of a cervical rib. The EMG shows a pattern of active denervation in left C8 and T1 roots. 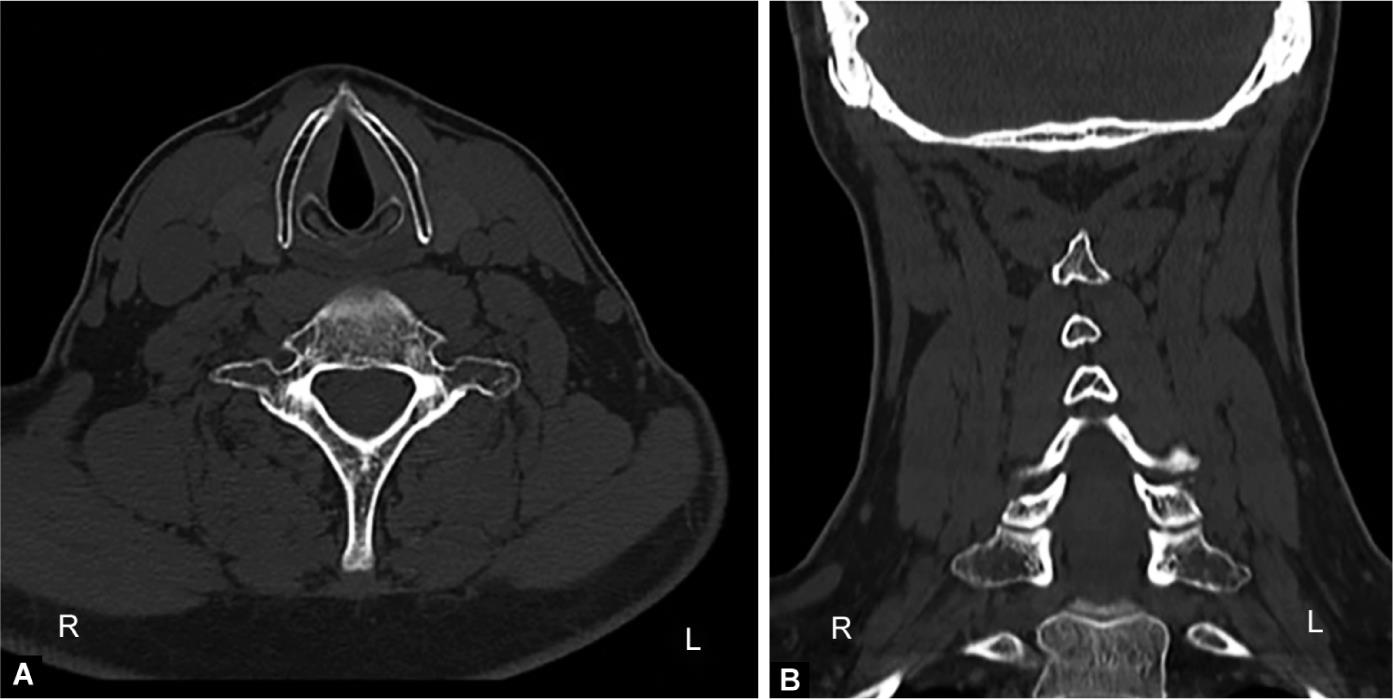 Figs 1A and B: Preoperative CT scan. Cervical CT axial (A) and coronal (B) view shows left C7 transverse mega-apophysis

Our hypothesis was that the inferior trunk of the brachial plexus was compressed between the left C7 transverse mega-apophysis and the first left costal arch causing a neurogenic thoracic outlet syndrome. Surgical intervention consisted in a C7 left transversectomy and resection of the first costal arch. After the intervention, the patient improved in left hand paresis and left arm paresthesias (Fig. 3). After 1 year of follow-up, the patient remained asymptomatic.

Congenital cervical skeletal anomalies are not frequent. Transverse mega-apophysis (also named transverse apophysomegaly or elongation of the transverse vertebral process) is defined as an elongation of the transverse process more laterally than that of T1 when the patient’s head is central. It can be unilateral or bilateral and is more frequent at the C7 level. Cervical transverse mega-apophysis is identified approximatively in 2% of the population. However, its prevalence in the population can be greater because it often exists without symptoms and is most commonly an incidental radiographic finding.1–4 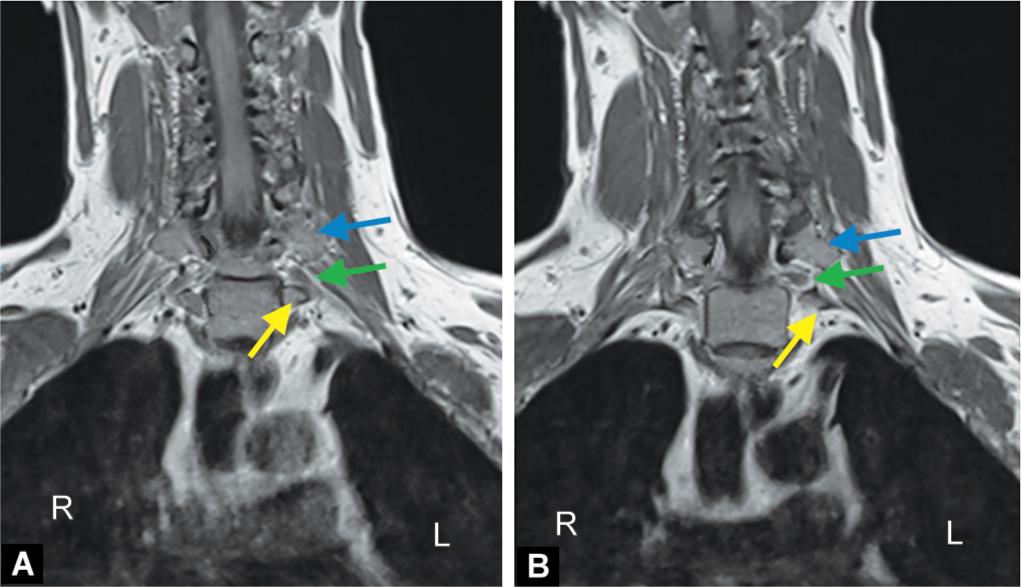 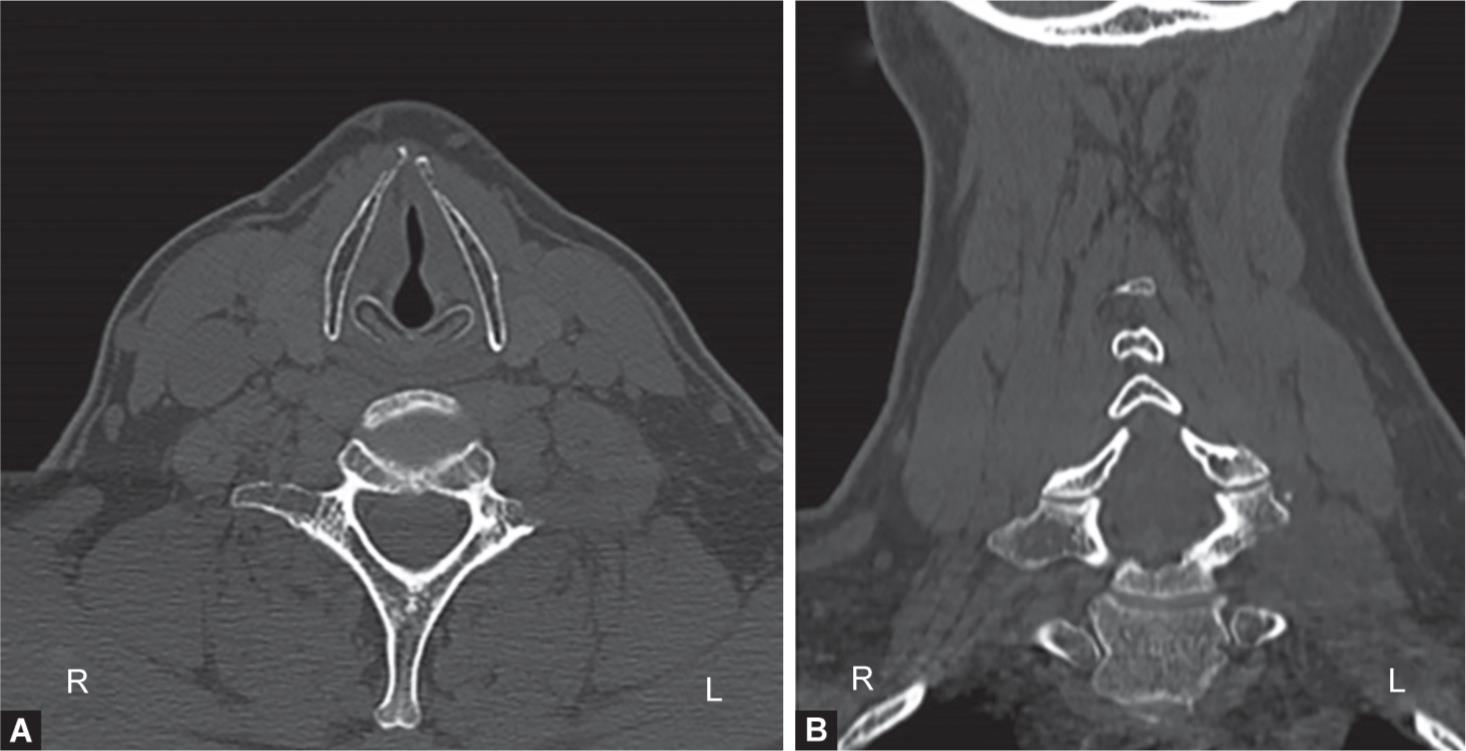 Figs 3A and B: Postoperative CT scan. Cervical CT axial (A) and coronal (B) view shows left C7 transversectomy

It is estimated that less than 10% of cases are symptomatic. Onset of the symptoms is usually in adult life due to the tendency to dropping of the shoulder girdle and the reduction in the elasticity of the tissues. Some maneuvers like Adson maneuver or hyperabduction of the arm may cause the symptoms. Symptoms result from compression of the subclavian artery or the brachial plexus, causing, respectively, arterial thoracic outlet syndrome (ATOS) or neurogenic thoracic outlet syndrome (NTOS), being the C8 and T1 roots the neural structures most commonly involved causing radiculopathy or plexopathy. There is no correlation between the severity of the clinical impairment and the radiological findings.1,2,5

Although a conservative treatment should be first in line of therapy, surgical decompression to remove the transverse mega-apophysis is recommended when conservative management has failed.7,8

Neurogenic thoracic outlet syndrome is a well-described disorder typically caused by the presence of fibrous and muscular bands, variations in the insertion of the pectoralis minor, the presence of neural structures that follow an atypical course, the existence of a cervical rib, trauma injuries, repetitive arm and shoulder movements and activity, such as from playing certain sports or others causes that can alter the upper thoracic aperture.