Schwannomas are tumors derived from Schwann cells that produce the myelin sheath that covers peripheral nerves, uncommon in the head and neck area. These rare tumors can arise from cranial nerves in their extracranial pathways, from sympathetic chains and peripheral nerves. We report the case of a female patient with a cervical accessory nerve schwannoma and its computed tomography (CT) scan, magnetic resonance imaging (MRI), and histopathologic findings. Surgical excision avoiding nerve manipulation continues to be the first-line therapy in these cases, to avoid or minimize nerve-related complications.

Schwannomas are encapsulated tumors derived from cells that produce the myelin sheath that covers peripheral nerves, the Schwann cells, composed of two types of tissue areas (antoni A and B), easily distinguished and mixed in variable proportions.1 These uncommon neoplasms represent approximately 5% of all soft tissue tumors.2) About 45% have an extracranial presentation in the neck area and can affect peripheral nerves; cranial nerves V, VII, X, XI, and XII; and sympathetic chains.3 Previous studies have found that the most affected nerve is cranial nerve X or vagus nerve implicated in 37%, with the least affected being cranial nerve XI or accessory nerve in only 4% of cases.4 Age at presentation is wide-ranging, reported in most series from 19 to 49 years, although it has been reported from 10 up to 70 years, with a mean of 43 ± 15 years, with a slight male predominance.5,6 The most common presentation from this type of tumors is a painless, slow-growing tumor in the cervical area, but can have a different presentation depending on the involved nerve.7

A 48-year-old female patient with a family history of systemic hypertension, type 2 diabetes mellitus, and hypothyroidism (with a past medical record of hypothyroidism diagnosed 4 years ago), in treatment with levothyroxine 100 μg daily was studied. She denied alcohol, tobacco, or any other drug consumption.

She was referred and presented to our department for evaluation of an 18-month history of a painless, slow-growing tumor in the left posterior cervical triangle. She denied any other symptoms.

Ear, nose, and throat examinations reported no pathologic signs. Neck examination revealed a well-defined, 4 x 3 cm, oval-shaped, firm, painless, nonfixed mass in the left posterior cervical triangle; no adenopathies were found and the rest of the cervical structures were normal. Flexible endoscopy was performed with no signs of airway compromise.

Soft tissue cervical ultrasonography showed a homogenous, oval-shaped, 5 x 3 cm mass, with posterior enhancement, and no central vascularity on Doppler was found (Fig. 1). Laboratory blood and urine studies on admission showed no altered values. Ultrasound-guided fine needle aspiration biopsy was taken, reporting a preliminary result of Schwannoma. Contrast-enhanced computed tomography (CT) scan of the neck and thorax was performed to determine extension of the tumor. Axial, coronal, and sagittal CT images showed a well-defined, regular, hypodense, homogenous lesion in the left posterior triangle, measuring 5 x 3 cm, anteriorly to the trapezius muscle; no contrast uptake was noted; and no nodal alterations were found at any level (Figs 2 and 3). 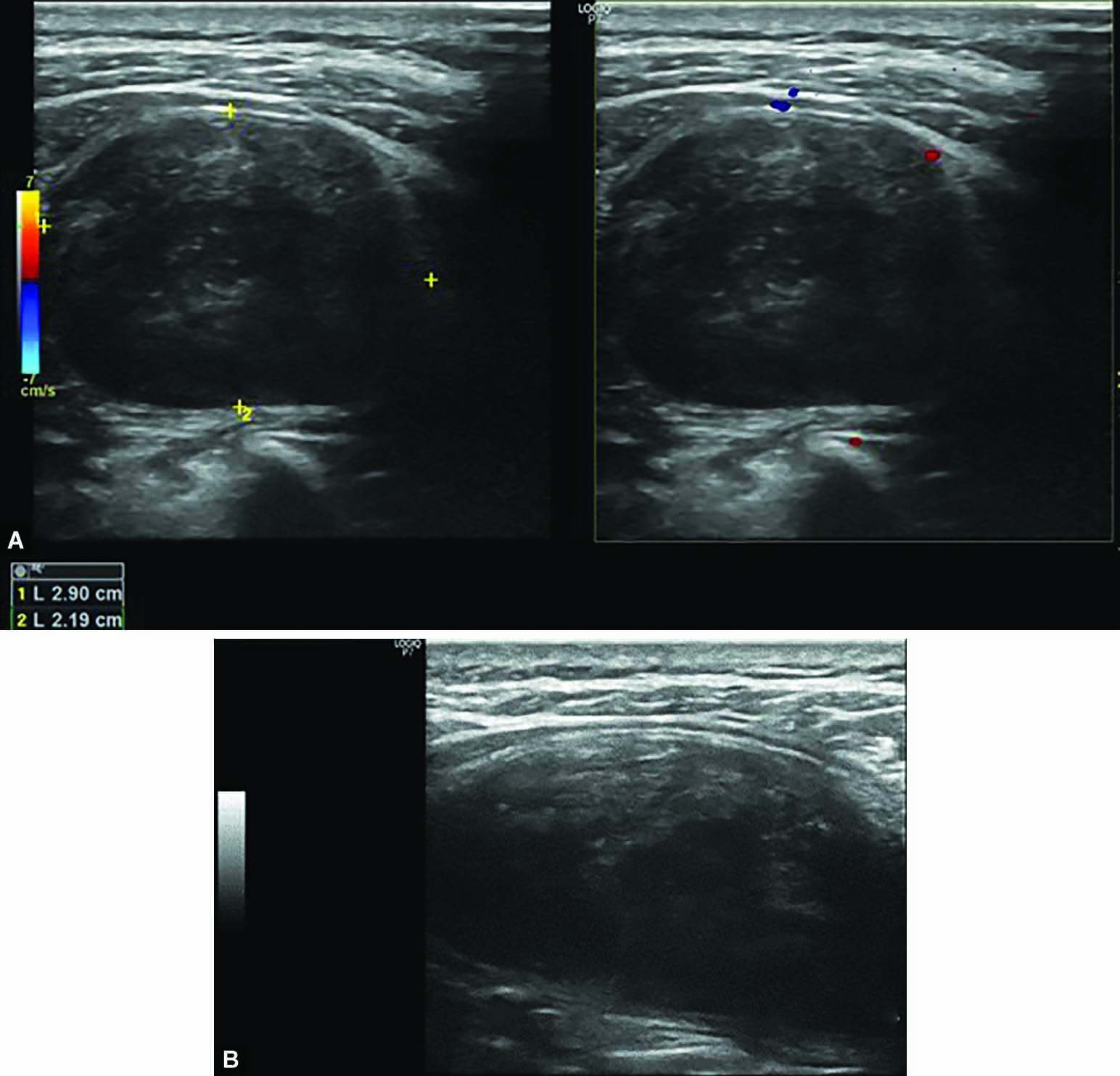 Figs 1A and B: Soft tissue ultrasound imaging of the left posterior cervical triangle lesion. (A) Transverse view of Doppler ultrasound scan; (B) Sagittal view of the lesion

Figs 2A and B: Axial view of contrast-enhanced CT scan

Figs 3A and B: Contrast-enhanced CT scan: (A) Coronal view; (B) Sagittal view 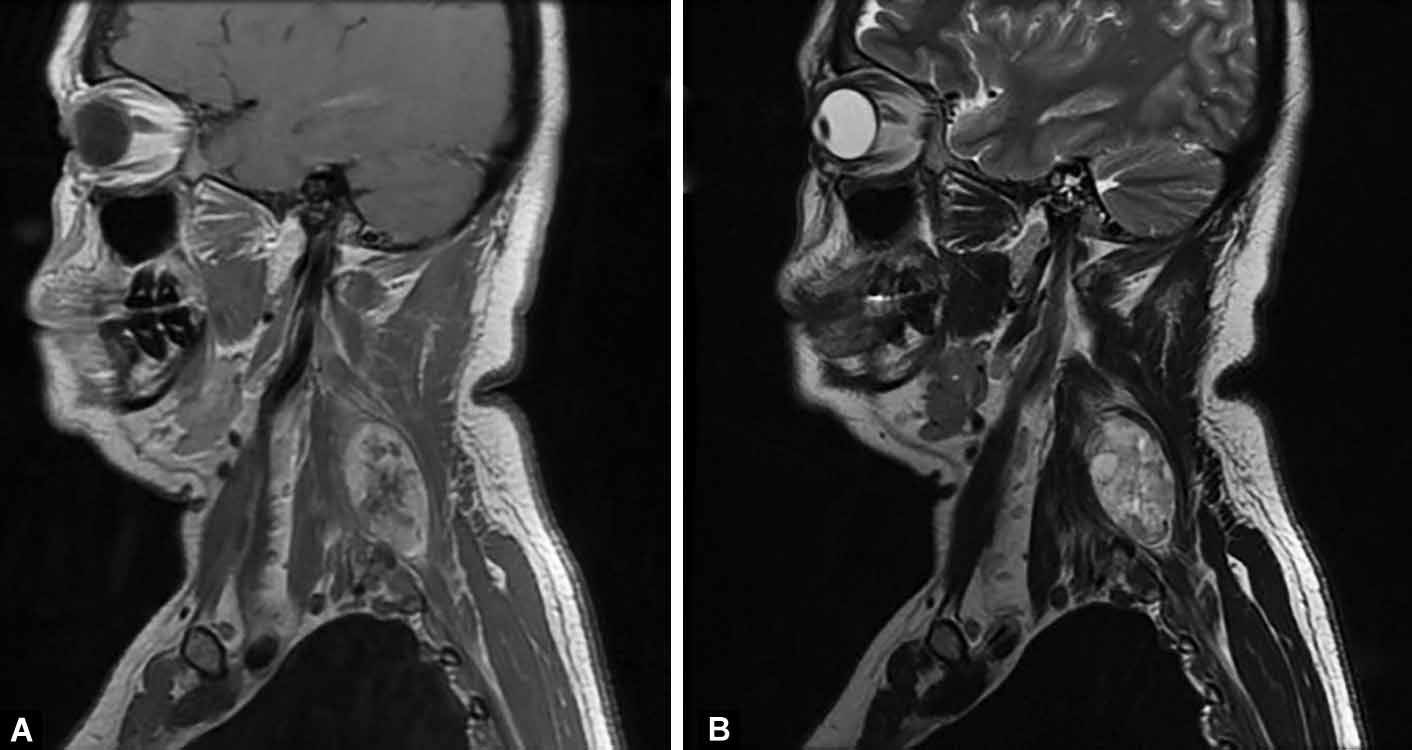 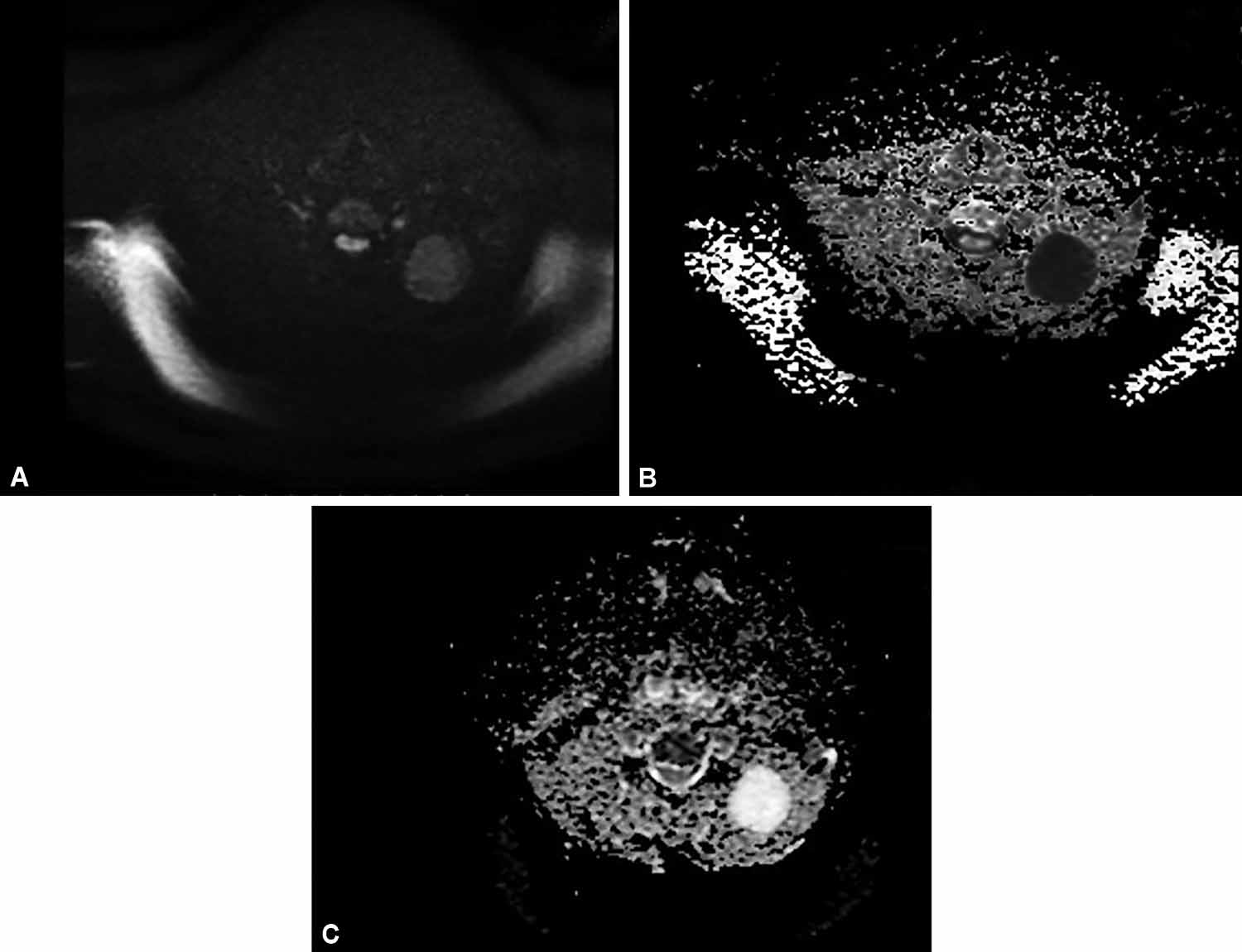 According to these findings, surgical excision of the tumor was planned. A lateral cervical incision in the left posterior triangle of approximately 6 cm long was done; cervical dissection by planes preserving vascular and nervous structures was done; a regular, oval, encapsulated tumor was found, dissected from surrounding tissues and from the spinal accessory nerve, which was preserved; tumor was excised in its totality; incision was sutured by planes; and a 1/4” Penrose drainage was placed (Fig. 7). 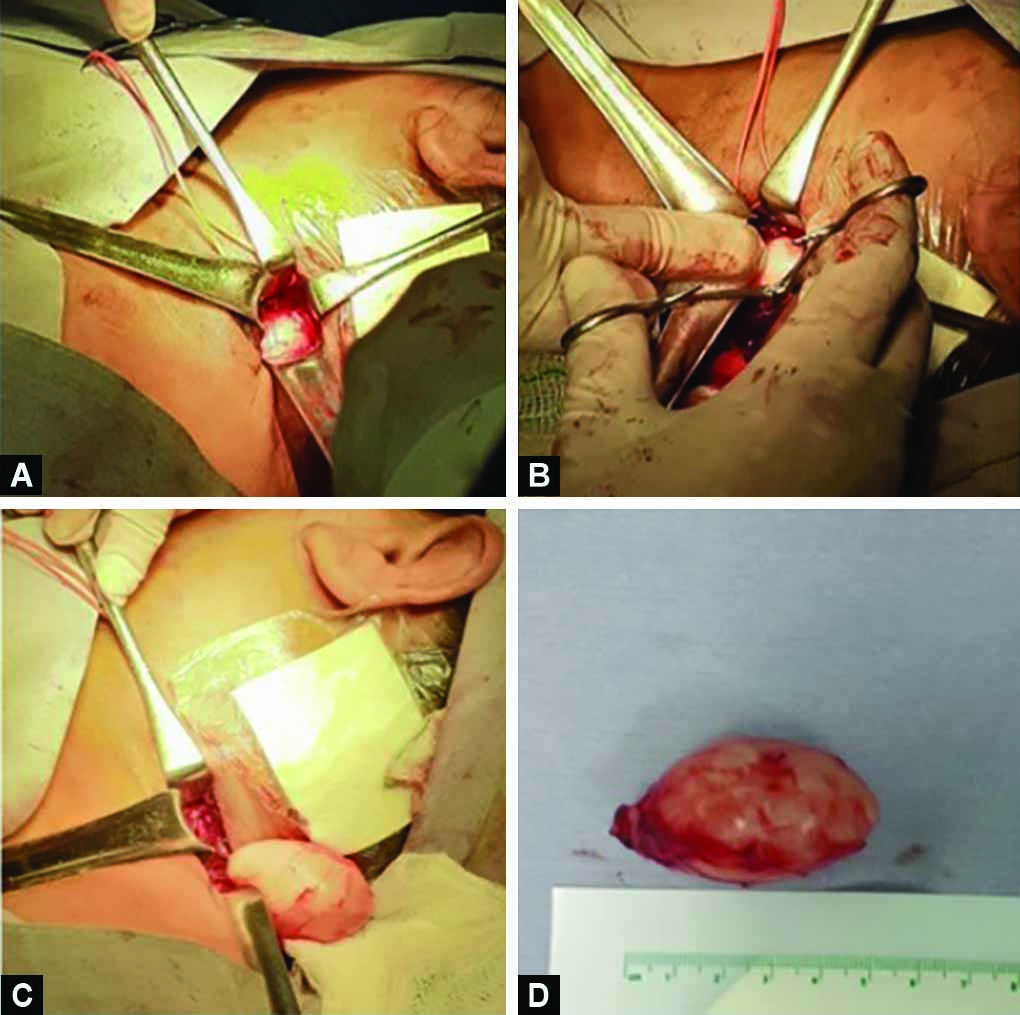 Figs 7A to D: Surgical excision of the tumor

Histopathological findings revealed the typical biphasic pattern, with areas of hypercellularity and hypocellularity and an important myxoid component (Fig. 8). 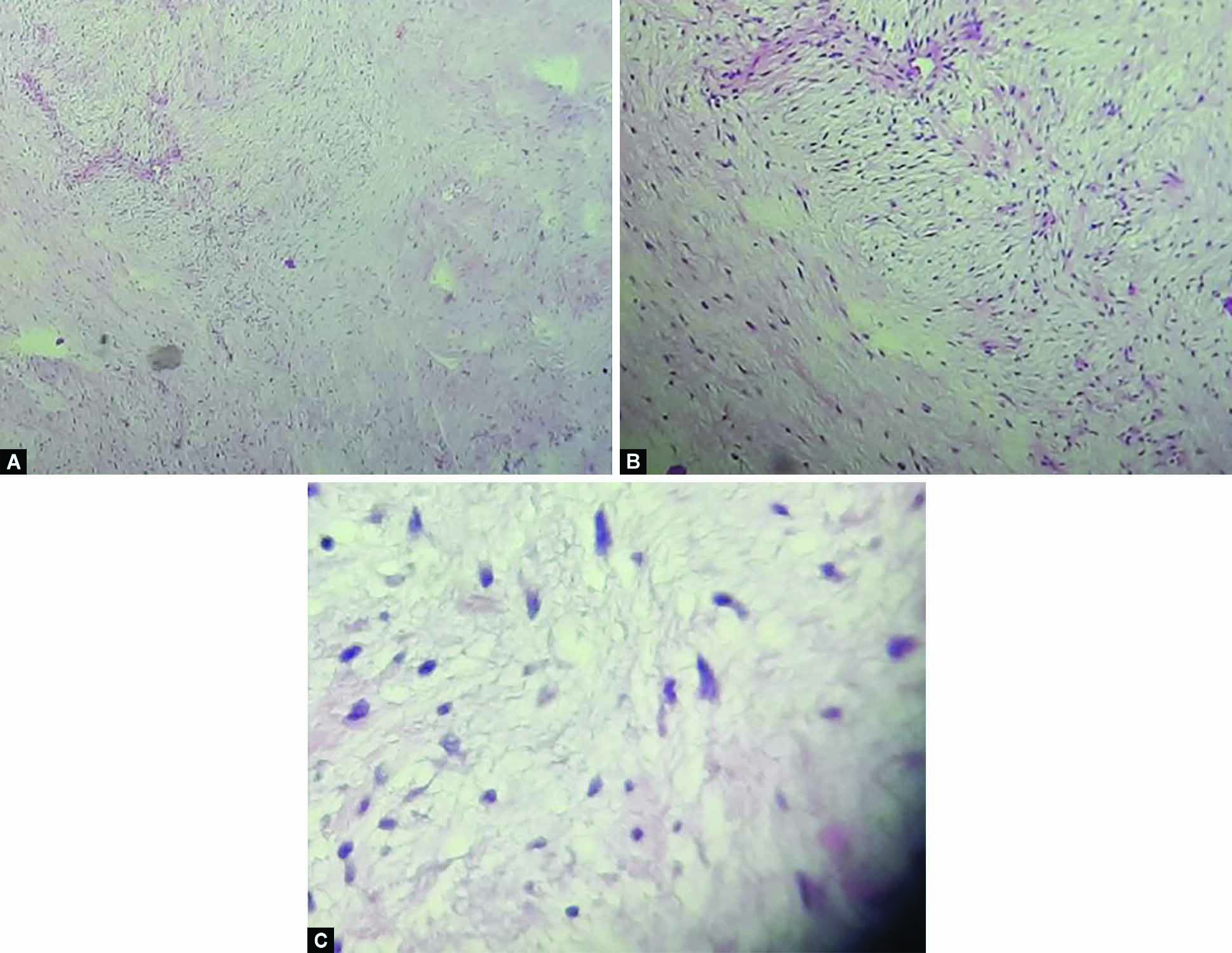 During immediate postoperative period, the patient referred left shoulder weakness, without limitation of movement of the extremity, and drainage and sutures were removed 5 days after surgery with no signs of wound infection or seroma formation. At 6 months follow-up no sign of recurrence and neurological or movement deficit were found.

As described previously, Schwannomas are rare tumors. Colreavy et al. in a 10-year study found that seven of his eight cases were presented as neck masses, as in our case.3 On the contrary, Biswas et al., also in a 10-year study of 31 cases, found that 42% were presented in the neck area, and the most common presentation was a painless neck mass.7 Within these uncommon tumors, those involving the accessory nerve are especially infrequent, accounting for only 4%.4 This cases follows the typical clinical presentation as the one reported in international literature,7 of a painless, slow-growing, nonfixed neck mass, without neurologic findings.

Also, in typical fashion according to literature, this case followed the described presentation during imaging studies, presenting as a tumor with no central vascularity on ultrasound, and as a hypodense, with no contrast uptake and no signs of bone erosion on CT scan.8 On MRI, the iso- or hyperintense mass on T1-weigted images, with no contrast uptake, and a hyperintense, heterogenous mass on T2-weighted images, were also characteristic to a Schwannoma according to the existing literature.9 DWI and ADC showed a hyperintense lesion demonstrating its hypercellularity and benign features.10

Accessory nerve schwannoma in the neck area is an uncommon location of a rare tumor, in which imaging studies can be very useful, so we include ultrasound, CT scan, and MRI images. Surgical therapy has been reported as complex and complicated in case reports and series, not exempt of complication after the excision. In our case. It was done without any complications during or after the mass removal.